For twenty years and more, Vancouver has been a major film-making centre.  In particular, we are well-known for the numbers of “cult” TV series that have used our city and its environs as their own — “Smallville“, for example, “MacGyver“, “Battlestar Galactica” and, most especially, “X-Files“.  So well known that fans of the shows make pilgrimages to Vancouver to see the locations live.

In a fascinating essay entitled “Everywhere and nowhere: Vancouver, fan pilgrimage and the urban imaginary“, Will Brooker notes that the average tourist will enjoy our art deco Marine Building as an architectural jewel, while one fan tourist will see the building as the “Daily Planet” office from “Smallville“, and another will recognize it as where X-Filer Scully chased her sister’s assassin. 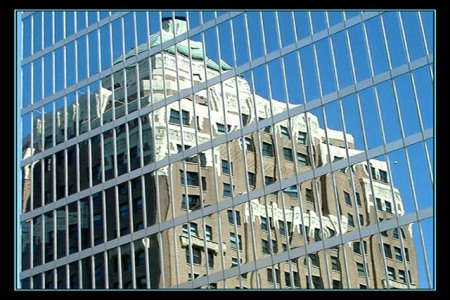 Our Colosseum-inspired Public Library is Metropolis Courthouse in “Smallville“, but for the visiting “Battlestar” fan it will be on the planet Caprica.

The premise of the article is that Vancouver is so popular a location that, in post-modern imagery, it has become “flat” and thus amenable to

“dress-up and disguise, and in turn the pilgrims who recognize and remember its disguises – seeing the Marine Building doubled as the Daily Planet building, for instance – experience the city not as the dully unremarkable subtopia of Relph’s account or as the postmodern ‘scamscape’ Soja cautions against in Californian suburbs, but as several impossible cities laid over the real in a liberating geography.”

Brooker notes that Vancouver’s position in fandom is entirely different than, say, Graceland or Coronation Street, where imaginations are limited to a single appreciation.  The fan visiting Vancouver invariably finds multiple meanings because “more than most sites of fan pilgrimage, they evoke other imaginary maps  that have to be held in a double, triple, multiple vision alongside the real.”  Clearly we are in the the “postmodern realm of simulation and pastiche”.  However,

“Vancouver is a slightly different case to the more obvious simulation cities and suburbs. Unlike theme-park worlds, its other-directedness and points of connection are visible only to those pilgrims with specialist knowledge and fan investment. The passages to other worlds – the Marine Building as part of Scully’s Washington DC, the cathedral as a route to Mulder’s Iowa – are hidden to the non-fan.”

Those of us who live here generally experience neither the “dully unremarkable suptopia”, nor Soja’s “scamscape”.  But each of us can feel the thrill of the fan when we see a recognizably Vancouver building standing in for someplace else.