On this day in 1940, the Lascaux caves in central France were discovered by four teenagers. As they entered the long shaft down into the cavern, the boys saw vivid pictures of animals on the walls. 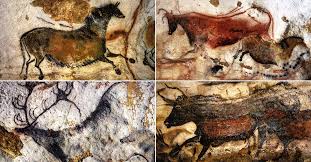 When the site was made available in the later 1940s, this cave art was wildly popular with the public. More importantly, it allowed everyone, both public and scientists, to understand more clearly that the so-called “cave men” were far more than the mindless brutes of previous imagination.

At about 17,000 years old, the Lascaux images are far from being the earliest known cave art today — several caves in Europe and Indonesia have art from about 40,000 years ago, and a recent “sketch” on a rock in South Africa may be much older.  However, the enormous trove of images (more than 900 animals identified) at Lascaux combined with the encouragement of tourist traffic to the location has allowed this cave complex to become the best known of all cave art.

The discovery at Lascaux marked an important anniversary in our understanding of who we are and where we came from.

This entry was posted on Monday, September 12th, 2022 at 9:00 am and is filed under Art & Design, Cultural Anthropology, History. You can follow any responses to this entry through the RSS 2.0 feed. You can leave a response, or trackback from your own site.

One Response to Lascaux