And Then The Blitz Began 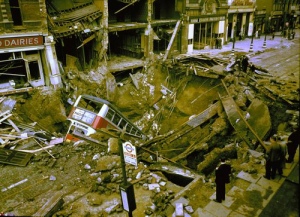 The German Luftwaffe attacks against London known as the Blitz began on the afternoon of September 7, 1940 — eighty-one years ago today.  They went on essentially uninterrupted for 79 days, and expanded across Great Britain.  Here can be found the Guardian‘s report of the first night’s bombing.

The German airmen apparently have orders to loose their bombs whenever they feel they are over the area called Metropolitan London.  Certainly 90% of all the damage done was to non-military objectives.

About 43,000 civilians died during the Blitz. Almost 140,000 more were injured, and more than a million homes damaged or destroyed. Even when the Blitz itself was over, the Germans continued to bomb London  for several years.  My parents spent much of their teen-aged years running to air shelters, sleeping in the Underground stations.  My mother went to the school which suffered the first V2 rocket attack.  Thousands of younger children were evacuated from London to “safer” country towns.  A dozen or more years later, when I was a kid in the early 50s in west London, all my “playgrounds” were bomb sites that still hadn’t been rebuilt.

Those of us who are lucky to live in North America have no conception of what this could be like. Imagine, perhaps, the events of 9/11 happening all over the country every day for two months and more. And all of this just one lifetime away from us.

This entry was posted on Tuesday, September 7th, 2021 at 3:00 pm and is filed under History, Memoir. You can follow any responses to this entry through the RSS 2.0 feed. You can leave a response, or trackback from your own site.