This is Democracy For You

The October meeting of the Grandview Woodland Area Council (GWAC) will be a ZOOM meeting on Monday 5th October at 7:00pm.

It will be a form of open mic affair for the GWAC Directors to listen to residents’ opinions. According to an email from a Director:

“[W]e’re approaching this meeting as an opportunity to hear from our members about the issue of housing and development in Grandview, in particular as it intersects with the current homelessness situation in the neighbourhood.

We’ll start with a bit of summary discussion about the current pressures on the neighbourhood, providing some background regarding the tent encampment situation as well as some of the current housing proposals in the works: the non-profit rental project at 1766 Frances, the fully market development project at 2300 Charles and the proposal for social housing on the Britannia site; then we’ll offer the members a chance to share their views regarding when and if the community plan should be relaxed for a project providing community benefit and what housing is the right fit.

The goal of the meeting is to hear from our membership to inform the direction GWAC should follow on these issues.”

I’m sure some divergent voices will be heard on these issues. I wonder if any of the Vancouver-Hastings candidates will join us?

It was a splendid T-shirt day to go walking down the Drive yesterday; hopefully, these sunny days will carry us well into October.

The former cannabis dispensary at 2137 Commercial is still closed but the rebranding for a re-opening is coming along well:

The former site of Falcone’s (bar and butchery) at 1810-1812 Commercial has morphed quickly into a place called Social. i am told it is owned by the Harbour Oyster Bar people, but I have not confirmed that yet.

My BBQ Hut at 1678 Commercial appears to have closed. There is a “Coming Soon” notice in the window without further information. 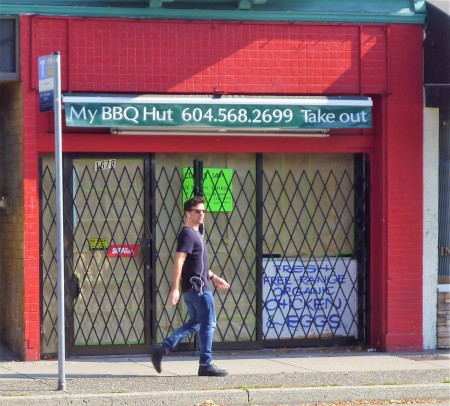 The storefront at 1303 Commercial has been taken over this month as the election office for the NDP.

Mogu at 1012 Commercial is now open, and gets a shout out from the Daily Hive.

The tiny store at 931 Commercial is being refitted and will soon re-open as a Covid Cafe.

We have retreated a little from the high of storefront vacancies of the previous few months. And, of the 18 empty storefronts this month, at least 7 are being refitted with hopes for an early re-opening.

Once again, Renzo’s Cafe, and Penelope’s are still  not operating  but neither seems closed.