A Good Diet v. The Virus

The other day I mentioned on social media that the Everloving and I were going for dim sum today. Normally, that would not have elicited a moment’s interest from anyone but these are anything but normal times.

As a society we are in the midst (or perhaps just the beginning) of a virus pandemic panic that is beginning to paralyse everyday activities: business and recreational travel has almost ceased, sports events have been cancelled or closed to the public, major gatherings of people are discouraged, handshakes have given way to elbow bumps, and there are reports of toilet-paper riots at Costco, Even some of my most rational acquaintances have become besotted with following every drip of news about covid-19.

So, my announcement was met with shock in some quarters. I was advised not to go (the risk of infection was too high), I was told that Chinese restaurants are empty these days (and so eating there would be weird), and our continued good health was wished for several times.

Well, we went.  On the way, the cab driver told us that all Chinese restaurants were empty and some had even laid off their staff. It would have been a surprise to him, I am sure, to see the crowds of people outside Western Lake’s door happily waiting for their number to be called.  It took us a while to barge through the crowd to get to the reception desk but, once there, we were soon seated for our reservation.  It was packed, every table filled to the brim with contented customers, none of whom were wearing masks, and attentive servers, most of whom we have known for a decade and more.

We stuffed ourselves with sui mai, ha gow, deep fried squid, chow fun, spicy green beans, and finished it off with chilled goji berry with lychee gelatin.  It was a feast, each bite tastier than the last.  In the hour or so we were there, there was always a lineup, and the crowd at the door when we left was thicker than when we arrived.  There seems no chance that Western Lake is going out of business any time soon.

But they were definitely aware of the virus. We were chatting with the manager. His uncle (who was our very friendly landlord for 17 years) just came back from a Mediterranean cruise that included Italy. He and his wife are self-quarantining for two weeks.

Other than that, whatever pandemic panic is gripping the city, the Province, the world, there was no evidence of it all today at Victoria & 34th.

To me, it is a no-brainer that women should be — and should be treated as — equal to men in all respects.  Arguments against this thesis — whether by religionists (of any faith), GOPers, Tories, and other misogynists — do not rise above the thinking of Neanderthals.  For anyone with a whit of common sense and a whiff of humanity it should be obvious, I would have thought. Unfortunately, that is not the case in many parts of the world.

In 2015, Pew Research conducted a Global Attitudes survey in 38 countries that revealed significant differences of opinion. I doubt the figures have changed much since then. 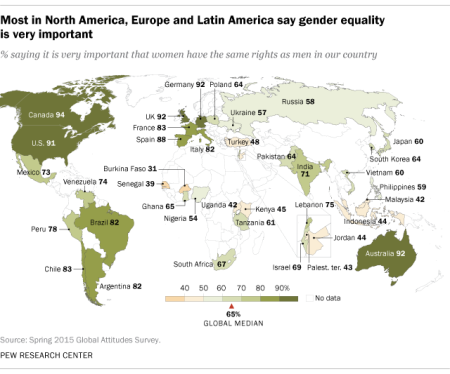 [select image for a better view] 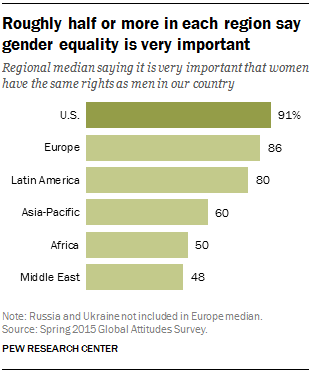 Even in countries, like Canada, the US, and the UK, which appear to score well in this survey, women are still not treated as equals when it comes to pay and opportunities in management, the professions, and science.  The 2016 US Presidential election revealed a continuing deep distrust (at best) regarding the possibility of a woman taking the top job.

There are structural gender issues that have to be fixed in all societies but that doesn’t mean to say we should leave the fix for politicians to deal with.  Far from it. If, as individuals, we all are careful to treat every other individual as a human being rather than as a member of some group or other, then we can solve this unhappy situation far quicker and more completely than any legislation.