A Different View of Chopsticks

China is the world’s largest producer of disposable chopsticks:

“Writing in the Los Angeles Times, Daniel K. Gardner, a historian at Smith College who studies environmental issues in modern China, reported that some 100,000 laborers manufacture the implements at 300 factories … Annually, Chinese chopstick factories fashion 80 billion pairs of disposable chopsticks, according to the South China Morning Post, and many of them wind up in the hands of diners elsewhere. China exported 165,000 tons of disposable chopsticks between 2000 and 2006, according to the Japan Times.

Atlas Obscura has some wonderful photographs of the production: 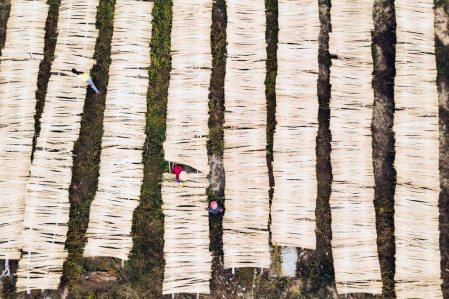 Bamboo is the preferred material:

“Because it’s not particularly porous and doesn’t absorb much water, it’s less likely than other woods to be teeming with bacteria, and it can take a lot of abuse in the kitchen. In terms of tensile strength—the extent to which a material can withstand being stretched before it snaps—researchers have found that bamboo holds its own against steel and reinforced plastics. Many bamboo chopsticks can be reused again and again. And unlike trees, bamboo grows at a dizzying pace. “The main reason for bamboo being so useful is that it is basically a grass which grows very fast—you’re looking at 36 inches in a 24-hour period,” says Q. Edward Wang, [author of the book Chopsticks: A Cultural and Culinary History\ . “It can grow 1.6 inches in an hour. It’s crazy.”

I’ll treat them with more respect in the future.

To Remember the Great

Today is the 1,120th anniversary of the death of King Alfred the Great.

And today, the English rugby team defeated the mighty All Blacks in the World Cup semi-final.

Definitely a day to remember.