Night Music: One Too Many Mornings

Now that the developers, led by Westbank, have published their new proposals for the redevelopment of Commercial & Broadway with towers vastly in excess of the Community Plan height guidelines, I thought it might be useful to remind ourselves of the sorry history of this project from 2012 to today.

We begin in 2012 with the awful GW Plan Emerging Directions document. As some of you will recall, the GW Community Plan process began well enough in 2011, with a number of workshops on various aspects of the issues facing Grandview.  When the planners’ first draft of Emerging Directions was published in June 2012, it covered many of those issues and discussions well.  Unfortunately, they formed just a small part of the document. The bulk of the paper comprised CoV Planning’s ideas for rezoning right across the neighbourhood — zonings which had never formed part of any of the consultations to that date. They came to us as a complete surprise. In particular, this was the first time anyone had ever mentioned to us the possibility of a dozen high rise buildings at Commercial & Broadway.

The furore caused by this sleight of hand attempt to slip in zonings that had never been discussed caused an immediate uproar. By early July, the Planners recognized they had gone too far at Commercial & Broadway and so threw together a workshop on that particular area.  This was the first time they publicly recognized the process had failed.  Looking back, we were too confident this workshop meant something; as people who attended talked with each other, we finally realised how stacked the meeting had been with developers.

Much later we would discover that the extraordinary height of the proposed towers at Commercial & Broadway were not the idea of the planners themselves but had emerged after political interference from the City Manager and others in the Vision hierarchy.

For about a year, there was a pause in overt actions by Planning. All four of the Community Plans (GW, Marpole, West End, and DTES) were in serious trouble and Planner Brian Jackson needed time to decided what to do.  On September 25th, 2013, City Council received the Jackson Report on the four Community Plans.  Many of us got to speak for our allotted five minutes.  As a result of the Jackson Report, Grandview received a 12-month extension to the Plan’s schedule, and something called a Citizens’ Assembly that was not defined.

(I won’t go into the travesty that was the Citizens’ Assembly. A great many posts on that subject can be found here.  A significantly more detailed history of the period from the beginning of the Community Plan to the formation of the Assembly can be found here).

Finally, in the early summer of 2016, CoV Planning produced the Grandview Woodland Community Plan. In general, I approved of the Plan though many of the details were problematic and opposed by the community, and many of us continued to be aggrieved by the process. Included in the Plan, bludgeoned through City Council by the Vision majority later that summer, was approval for three towers at Commercial & Broadway to a maximum of 24 stories and a carefully positioned Public Plaza.

We then had a series of BS PR sessions that really gave us few answers. The first was arranged by Brooks Pooni so this was no great surprise.  There was another sponsored by CoV Planning which was equally problematic.  The first was specifically about the promised public Plaza which the developer wanted to move.  We did learn that Safeway, which holds a 50-year lease on the property, has refused to accept the idea of a two-storey store with a smaller ground-level footprint, and that has complicated designs for the developer.

However, it was a heavily engineered meeting: ticketing through Eventbrite, 200 neatly organised chairs, each with a Response form, three index cards for questions, and a pen – we were not allowed to speak our questions.  There were plenty of staff there, presumably on overtime, lots of coffee, lots of cookies. This was an expensive outing, and all because a developer sneezed. The ugly asymmetry of power in this city was rarely more obvious. That being said, a month later Planning admitted that 61% of respondents opposed moving the Plaza.

Then there was the detailed Bing Thom presentation. 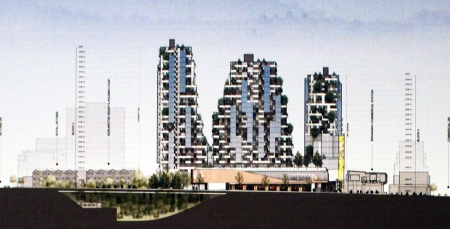 It was a detailed presentation (though we were still not allowed to ask questions and get public answers) but both the height of the proposed towers (17 to 24 stories) and the position of the Plaza (on the other side of Broadway, under the SkyTrain line) were still significant issues. It was said in the presentation and on the display boards that Safeway required (demanded?) 55,000 sq.ft on a single level (even though their current store is just 33,000 sq.ft), and that parking be no more than one level away from the store. Because of these requirements, they said, it was impossible to include the plaza on site.

That was in June 2017.  Bing Thom had died in the previous December and now Westbank has taken over the project using a new architect.  With their new proposal, we are being asked to accept three towers reaching up from 24 to 30 stories, well in excess of the heights approved in the Community Plan.  While the Plaza has now been moved back onto the site, the proposed design seems less like a public gathering space for families than an enhanced foyer for both the Safeway store and the Skytrain station.

I guess we now have to look forward to another series of presentations and a public hearing before City Council signs off. It will be interesting to see the public reaction.

“Our own, modern day, Jewish-Canadian Balzac will honour the West Coast with his presence at the end of the week. Michael Tregebov, pen and skates in hand, hand to his chest, his voice loaned to the CBC for three shows and counting (Weekend Morning, The Next Chapter, and Here & Now), will be in Vancouver to spiel and schmooze about his third and newest novel, Shot Rock: the tale of Blackie Timmerman and his curled and curling troubles.”

“Expect shtick, curling sticks, and Trotskyite (-ist?) undertones. As well as sundry copies of his novel, available to purchase.”

About eleven years ago, I wrote an excited post about an artist I had just come across — Vilhelm Hammershoi.

Since then, I have only come across a couple of his images. It was a stunning pleasure, therefore, to find a documentary made by Michael Palin, at about the same time as my previous post, that delves deeply into the artist and his motivations.

The documentary lasts about an hour and is well worthwhile!

Did you know that before 6,000 to 10,000 years ago all human beings had brown eyes?  A single gene mutation in a single individual created the change, and so those of us with blue eyes all have that individual as our ancestor, according to a major study by the University of Copenhagen:

“The mutation of brown eyes to blue represents neither a positive nor a negative mutation. It is one of several mutations such as hair colour, baldness, freckles and beauty spots, which neither increases nor reduces a human’s chance of survival. As Professor Eiberg says, “it simply shows that nature is constantly shuffling the human genome, creating a genetic cocktail of human chromosomes and trying out different changes as it does so.”