There is a useful article in Christie’s Online Magazine about Giorgio Morandi “arguably the greatest Italian painter of the twentieth century”. 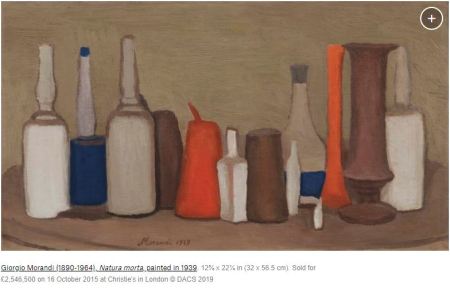 “From the early 1920s until the early 1960s, Morandi’s paintings show remarkable consistency. He has by now hit upon his trademark pictures: still-life arrangements of bottles, vases and jugs on a table, painted in largely sombre colours (greys, browns and chalky whites, above all). Superficially, these may all look similar. However, his painting is full of subtle shifts and inflections, dependent on precisely which objects are placed where; in what combination; and under what sort of light. Such was Morandi’s attention to detail that his slight shift of a bottle has been compared to the chess move of a grand master. 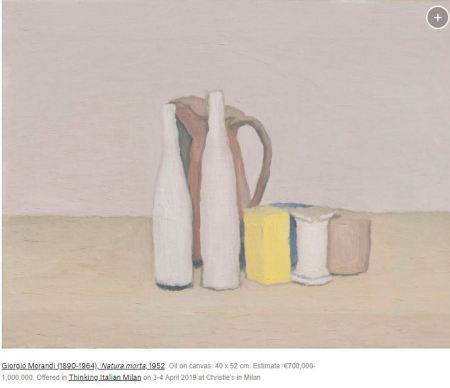 Morandi was an ascetic who reveled in frugality:

“He’s remembered as a simple, reclusive figure who went by the nickname of Il Monaco (‘The Monk’). A lifelong bachelor, he lived most of his adult life in a modest apartment with his three sisters, his bedroom doubling as a studio. As he himself put it, ‘I’m a painter of the kind of… composition that communicates a sense of tranquility and privacy, moods which I have always valued above all’.

An interesting article about a painter I barely knew before.

This entry was posted on Tuesday, March 26th, 2019 at 8:00 am and is filed under Art & Design, Other Writings. You can follow any responses to this entry through the RSS 2.0 feed. You can leave a response, or trackback from your own site.