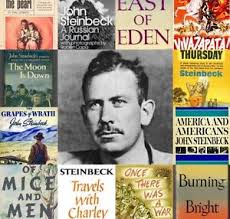 Today would have been the 117th birthday of Nobel Prize winner John Steinbeck. which deserves remembering.

I was reminded of his birthday by a short piece in Literary Hub which reprinted extracts from the original reviews of his major books.   For example, 1937’s Of Mice and Men elicited the following:

“John Steinbeck is no mere virtuoso in the art of story telling; but he is one. Whether he writes about the amiable outcasts of Tortilla Flat or about the grim strikers of In Dubious Battle, he tells a story. Of Mice and Men is a thriller, a gripping tale running to novelette length that you will not set down until it is finished.”

“The author now has a thesis—that the migrants will unite and overthrow their oppressors—and he wants to argue, as if he weren’t quite sure of it himself … Yet one soon forgets the faults of the story. What one remembers most of all is Steinbeck’s sympathy for the migrants—not pity, for that would mean he was putting himself above them; not love, for that would blind him to their faults, but rather a deep fellow feeling.”

This week I happen to be reading No Tine To Spare, a collection of short essays and blog posts by Ursula K. LeGuin. In it, she devotes one chapter to Grapes of Wrath.  The essay is about the damaged concept of The Great American Novel, which many critics claim Grapes of Wrath to be. LeGuin says it is better than that. It is, she says, “the most truly American book,” adding “A book that makes me cry the way music can or tragedy can  … must have something of greatness about it.”

For me, as a politicized teenager and already a Wobbly supporter, it was In Dubious Battle that spoke to me,  Not the most polished writing but perhaps his dramatic story of the strike is all the better for that. It was Barrack Obama’s favourite book by Steinbeck, too, apparently.

Hollywood seems to be wallowing in remakes these days. They could do worse than take another shot at “Grapes of Wrath“, “Of Mice and Men“, or “East of Eden“.