For about a year now I have reported on — and fully supported — a major development at Clark Drive and First Avenue  (see here, here, and here).

My support for this project has put me on the opposite side of the barricades to most of those with whom I have campaigned on projects in the past, and I have, to be frank, been shocked by some of the NIMBY rhetoric used by a vocal minority of the opponents.  My support, let me make clear, was based a number of factors:

The press release issued on 16th February 2018 specifically stated that the residential part of the project “will serve low-to moderate-income people.”  Now, a year later, we hear a different story.  According to an article in the Georgia Strait this week, City staff have decided that there will be 90 housing units of which half will be rented at “private rental market rates for Vancouver”.  And even with that, they still recommend that BC Housing be forgiven the $1.9m of development cost levies they should be paying.

This puts a completely different perspective on the project for me, and I have to ask, why?  There are literally thousands of market rental units in the pipeline already; what purpose would these 45 units serve.  We don’t need them. But we do need what we were promised — a supply of genuinely affordable housing for the 50% of Vancouverites who are trying to survive on median or lower incomes.

If our shiny new City Council approves the staff report as is, then one has to wonder if they have already fallen under the thrall of Vision’s private-sector-favouring staff as recent development approval decisions seem to suggest. They can still show some spine by rejecting this report and returning the entire project to its social housing roots.

For the longest time. those of us with an interest in such things, believed that the oldest representational art — which is to say images of people and animals rather than abstract symbols — was to be found in the caves of southern France, at Lascaux and elsewhere dated to about 35,000 years ago.  However, in the last few years, images of wild pigs were found in Indonesia that were slightly older. Now, a new discovery on Borneo pushes the earliest age back to 40,000 years ago. 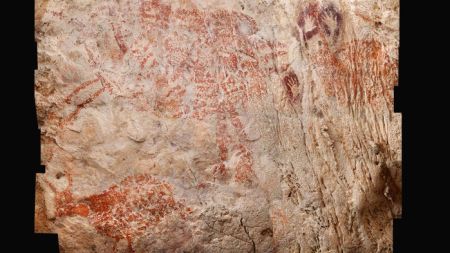 The indistinct image in the upper half is believed to be of wild cattle.

The exciting thing for me is that with the continuing discoveries of ancient art across all continents we can reasonably suppose that the making of representational art is a pan-human trait; it is part of who we are, part of the definition of being human, and was never limited to a particular identity group or geographic territory.

I like to think of these caves as the VR salons of their age, providing an immersive experience outside of reality.  All we have done is to improve the technology.