The Value Of A Picture

I have on occasion made posts here requesting anyone with early pictures of Commercial Drive and Grandview to make them available for study by historians and those interested in heritage issues.

I’m not talking about art studies by famous photographers, either, but rather snapshots by locals.  If your Aunt Gertrude was visiting in 1940 to see cousin Billy’s hardware store and a picture was taken, that would be great.  Historians may not be so interested in Gertrude and Billy themselves, but what we might get to see behind them and beside them can add vital historical information not otherwise available. I’ll give you an example:

At the very beginning of 1936, the former Odlum property on the east side of the 1500-block Commercial, to the intersection with Grant, was being developed as a gas station for Signal Oil. On the other side of Commercial, local developer Angus Campbell had bought the two lots on the corner with Grant. On pages 86-87 of “The Drive” I described these building projects which were completed by May 1936.   And I included a current photograph of the Campbell properties:

I had no reason to think the building had been altered since 1936.  However, we now have a wonderful image previously unseen from November 1937 that shows both the layout of the Signal Station on the east side (lower half of the image) but also, at the very right edge, a slice of the Blue Bird Beauty Salon on the west side: 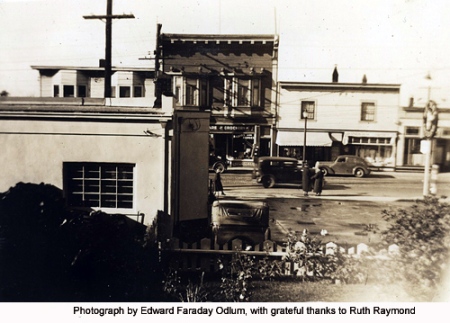 This photograph shows that those stores were originally built as single-storey structures and the building was modified and enlarged sometime later: something I might not have known without this image. I’m sure that when Edward Odlum took the picture he was primarily interested in the development of the Odlum lots on the east side, but his snapshot has also helped illuminate the history of the west side.

So, do you or your family have a collection of pictures that might be of interest to the Grandview Heritage Group?   If you do, please email me.  Thanks in advance!

This entry was posted on Saturday, November 3rd, 2018 at 11:24 am and is filed under History, History and Heritage. You can follow any responses to this entry through the RSS 2.0 feed. You can leave a response, or trackback from your own site.