The Death of Manchester United

When I was 8 years old, my parents had very little money and we lived in what today would be called a slum. We couldn’t afford magazines or anything of the sort, but we did get the Daily Mirror. The walls of my bedroom were covered in smudgy newspaper black-and-white photos of my heroes, Manchester United, and, most especially, their young superstar Duncan Edwards.

Sixty years ago today, an aeroplane carrying the team on a flight from Munich back to England crashed on take-off in the snow. Twenty people died at the scene, including ten players and trainers, and three others, including Duncan Edwards, died later from their injuries. It was a tragedy that brought England to a standstill. 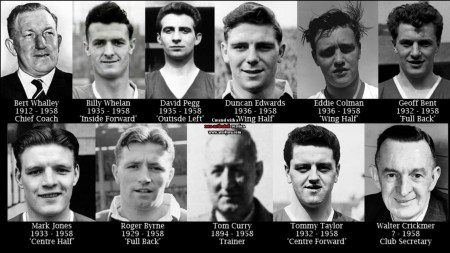 Clubs didn’t have huge bank accounts in those days and the disaster almost caused the club to fold.  In the end it took manager Matt Busby (who had been seriously injured in the crash) ten years to rebuild the team and win another championship.  Being young, I didn’t have the patience to wait and I had already switched my allegiance to Chelsea by then.

This entry was posted on Tuesday, February 6th, 2018 at 5:30 am and is filed under History, Memoir, Sports. You can follow any responses to this entry through the RSS 2.0 feed. You can leave a response, or trackback from your own site.