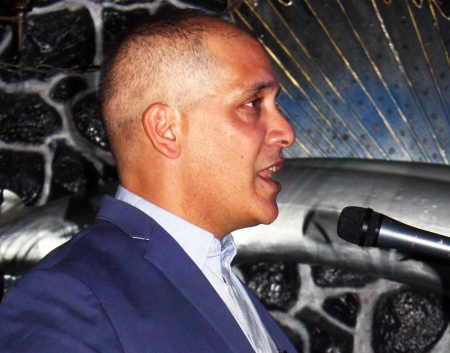 This evening I attended the soft launch of Pete Fry’s campaign for the City Council by-election in October, running for the Greens to work with Adriane Carr. Tonight’s event was a crowded and loud party at the Emerald on Gore. The joint was packed and it was great to be surrounded by the banter of civic politics once again.

Pete gave a speech of suitably moderate length but in which he hit all the right points. He showed that he understands we have been building the wrong kind of housing in Vancouver, and that the secret backdoor CAC negotiations with developers need to end and be bathed in transparency for the benefit of all.  He noted that, with Geoff Meggs gone, there is a chance to make a genuine contribution to the City with the issue of the viaducts. And he mentioned that he and his team are working on an imaginative scheme for redevelopment of the Hogan’s Alley heritage area.

Most of all, Pete stressed that he is willing to listen — a quality sorely lacking in much of Vancouver politics for a decade or more; that this is “our City” and that “together we can make changes.”

It was a good speech and was well received. My only concern is that, as we don’t have wards, his message needs to reach out beyond the issues facing DTES and Strathcona.  I will be looking for him to be broader in his messaging as the campaign rolls out.

Changes On The Drive #73

I had a medical appointment at 7 this morning so, when that was done, and after a lazy breakfast, I was able to complete my walk on the Drive in the coolness of the early morning. It was very pleasant and all finished by 9.

The building at 2211 Commercial is still for sale, and that at 2058 is still for lease, though Universal Technologies and the Bon Bon Laundry respectively are still operating.

Kokopelli Hair at 2048-2052 Commercial is celebrating its twentieth anniversary on the Drive. Well done to them!

The Precious and Few consignment store at 1928 seems to have bit the dust. There were workman inside today apparently beginning a full renovation.

Olivieri’s, the First Ravioli Store, at 1900 Commercial has been sold and is now Easy Shop. 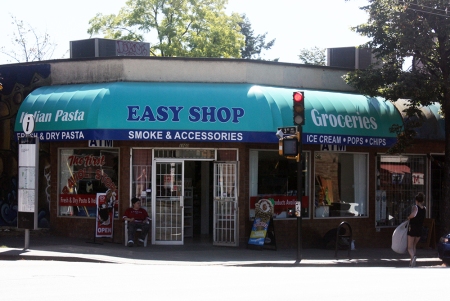 I notice that the old “First Ravioli” signs are still on the windows, so there is some continuity, and it looks to be the same inside as I recall. I believe I saw the lady who used to run this working in Bosa last week. Meanwhile, the old Waves coffee shop at 11858 is still vacant, and both the “For Lease” and “Leased” signs have disappeared.

I learn from a correspondent that the Mediterranean Food store at 1842 Commercial has changed hands. Jack Elmasu, the owner for more than 40 years, is staying on for a while to train the new owners in the business. My correspondent was also gracious enough to forward me this interesting article about the store and Jack Elmasu from 2011.

The Babylon Tea Shop at 1740 is still not open. It has appeared to be ready for more than a month, but “Opening Soon” is still the situation.

Mezcaleria at 1622 has new menus, it is reported.

The Libra Room is still very much closed and shuttered. However, I noticed this month (perhaps I missed them before), signs on the windows saying “Now hiring for all positions”. Is that a hopeful sign?

City Bistro at 1268 has closed already. The “opening soon” sign was up longer than the restaurant itself.

I never got to eat there. I tried to go with a Hungarian friend a few weeks ago but they were unexpectedly closed on a Thursday night.

Finally, it seems that this is the last month for Bosa on the Drive. They are planning to move back to their newly rebuilt premises on Victoria at the end of the month. It will be a real shame to lose them off the Drive. 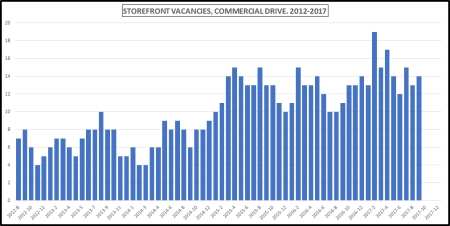 Previous Changes on The Drive editions. 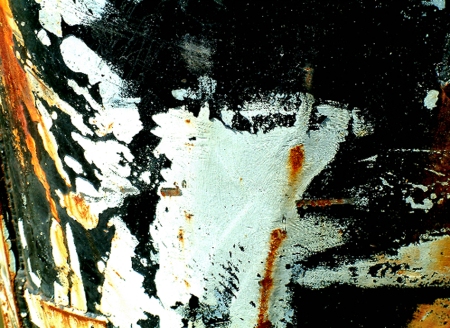