On this day in 1974, Richard M. Nixon, President of the United States of America and the most powerful man in the world, resigned his office.  Though many individuals and agencies played their role, it is hard to deny that the media was the key to this astonishing event. 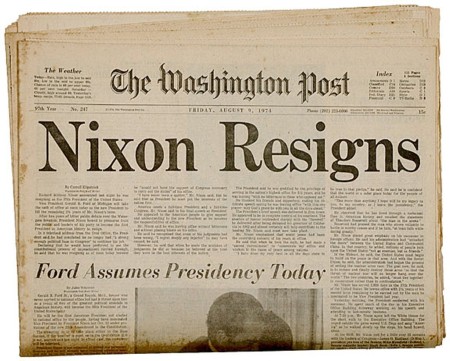 In 1968, people power, along with deep layers of personal guilt within the mind of the President, forced Lyndon Johnson to pull out of the 1968 election, and allowed someone no-one trusted to be elected in his stead. Just six years later, and not that long after a resounding re-election victory, Nixon was brought low by hubris on his side and dogged investigative legwork on the other.

The multi-year multi-level scandal that we know by the shorthand of “Watergate” followed by some years the incredible work of the Sunday Times to bring the thalidomide scandal to light in the UK and around the world. Together, those campaigns — and the ephemeral glamour of the New Journalism in the same period, followed by the first stirrings of the internet — led us to believe that yes, perhaps information is power and can be used to influence the world.

Utopian dreams of course, crushed in large part by the drab reactionaries who built the Cold War into a profit centre for billionaires, and who needed control over information to maintain their position. Clever marketing gave us entertainment of all kinds to keep us sweet, and fifty-seven varieties of toothpaste to make us believe we were in control of the choices we make.

What is now known as the Mainstream Media (the MSM) holds little hope for the kind of coverage we need today. They are controlled by the corporations that control everything else. There are individuals and tiny agencies that are trying to bring truths to light across many different platforms, but the darkness around becomes ever more close and enveloping.

I offer no solution to this dilemma. Just a hope that the few points of light will keep twinkling and that we will continue to share them as we can.

This entry was posted on Tuesday, August 9th, 2016 at 8:00 am and is filed under History, Mass Media, Other Writings, Technology. You can follow any responses to this entry through the RSS 2.0 feed. You can leave a response, or trackback from your own site.