This week’s Courier includes the results of a reader survey on “the best of” Vancouver. There were quite a few winners on the Drive.  Most of the categories were voted on as “east”, “west” and “downtown”; so, except for the first, all the winners below are for “Best Eastside…”

Congratulations to them all.

For what it is worth, I agree with the Bakery, Greek, and Patio awards (so long as I could sit in Havana’s patio eating Fet’s food).  The others, for my taste, are as follows:

I suspect I would really like Sula but I haven’t tried it yet. And I don’t have a bike, so ….

Next Monday evening’s GWAC meeting is themed on Transportation Changes in Grandview.  It will lead off with a presentation by Lon LaClaire, Manager of Strategic Transportation for the City of Vancouver.

In addition to the viaduct removal proposal, the City is also considering building a Malkin or National Road connector and they may close Prior Street at the CN rail crossing a few blocks west of Clark Drive. Bike lane improvements are also under study; and you can be sure the Streets for Everyone folks will be out in force to discuss that last item.

The meeting is expected to draw a crowd and so this month’s meeting will take place upstairs at the Canuck Family Education Centre, 1655 William, which is the building just to the north of the Grandview Park playground.  The start of the meeting will be 7:00pm and everyone is welcome to attend. Hope to see many of you there.

Night Music: Reflections Of My Life

I’m guessing that back in 1969 most of us were too stoned to really listen to the rather morbid lyrics. Still it was a pop song with a great hook, I thought.

I have written before about the asymmetry of power when a small local community group goes up against a developer with his millions, his armies of PR agents and, often enough, the institutional (and taxpayer-funded) power of City Hall.  Compared to that vast arsenal, the few dollars that can be collected by donations to the group seem even more puny than David’s legendary slingshot.

However, skill and passionate enthusiasm can overcome a great deal as the No Tower Coalition has proven time and time again.  Now, they have managed to produce an intelligent 8-minute video explaining their position.

It is well worth the time!

An Official Community Plan for Vancouver?

There is much talk these days among the twitterati about the “need” for an Official Community Plan (OCP) for Vancouver. It seems the main purpose of this is “to remove uncertainty” for the development industry. The fact that this will also remove the ability of community residents to protest unwanted development in any meaningful way is brushed aside or, even considered a value-add to an OCP.

There is often a failure in these discussions to see, or at least to acknowledge, that city building falls within a political/social envelope that is far more important than the daily work of planners and urbanists. But all these ideas are part of political systems and modes of thought, and that background needs to be recognised.

In discussions of politics, I have long ago rejected the so-called left-right continuum; for me, the important structural divide is between centralizers and de-centralizers: those who prefer a top-down decision making process, and those who argue that decisions should flow from the bottom up.

Clearly I fall into the other camp, believing that power should reside with the smallest possible group. That is not to say there is no place for larger groupings – in urban terms for management of water, sewage, transportation, for example. But these groups should be technical in nature and without separate executive authority. And yes, I believe that consent-building is more important than “efficiency”.

So, to bring this discussion back to the matter of an Official Community Plan for Vancouver, I am not opposed to the creation of an OCP but I am dubious as to how it is to be created under the existing conditions. We live in a city of centralizers and it is clear to me that an OCP developed under such a system will inevitably force neighbourhoods to vacate their decision-making and to conform to the OCP whether they want to or not. I would definitely oppose such an OCP.

If, however, each of our wonderfully diverse communities is empowered and enabled to create their own local community plan, and these plans are then stitched together, then such an overall OCP would clearly be acceptable (though its value would be limited). Some might argue that such a procedure would be impossible. However, I would remind them that this was what the popular and late-lamented City Plan process was all about.

I would further argue that some of our city planners could best be used by placing them in each community to act as technical advisers – perhaps even as visionaries – to assist local residents build the neighbourhood plans. This again is what happened in the 1978-1980 Grandview Community Plan which helped produce the diverse and successful community we see today.

Finally, if what the development industry wants is certainty, then it shouldn’t matter to them where the plans come from. A local community plan will be just as certain as an OCP.  Of course, I don’t accept that certainty is their only goal; freedom to build where and what and when they want is their ultimate objective, and I don’t believe that either style of plan should allow them that.

So, that is a “no” for a top-down OCP, and “yes” for plans built from the neighbourhood up.

I spent a great many years in marketing, including the successful redesign and relaunch of an already successful brand. I am aware, therefore, of the problems inherent in product change; and I remain fascinated by the general art of marketing and rebranding in particular.

That being said, it is no surprise that I would really enjoy the story of changing the logo of one of the world’s iconic products — Guinness and its harp.

The new logo and typeface on the left; the old on the right

I’m sure that a great many Guinness drinkers will not notice — at least consciously — the subtle change in design and font.  But as the story tells so well, the implication of hand-tooled craftsmanship will be unconsciously appreciated.

It was easy to place History before Politics,

Medicine before Physicians; and

had to come after

But how was he to choose

or Astronomy over Alchemy?

And Asimov could go anywhere,

with his reflections about water

on the half-moons of Venus.

With bookcases brushing the ceilings,

melding the books, shuffling the pages,

was turning out to be the hardest part

of moving in together.

Amid the piles of unsorted memoirs he halted,

He remembered the dancing, the dinners,

Smiling, it was easy to place Love before Duty.

Who Is The NIMBY?

Most serious planners, urbanists and academics agree that only those seeking to suppress debate use the juvenile school-yard taunt of “NIMBY”. As Jennifer Keesmat, Planning Director of the City of Toronto, recently said, she would never use the term, not only because it is a childish insult but especially, as she noted, so much of residents’ opposition to development is justified due to major planning errors in the past.

Moreover, it is a stupidly undefined term. For example, if I am opposed to a 20 storey building, but support a 10 storey structure, am I a NIMBY or do I simply oppose the larger option?

If, using another example, a famously low-rise and generally affordable community expresses itself opposed to an intrusive 12-storey condo tower but in favour of significant new amounts of four-storey affordable rental apartments, isn’t it the developer and their flunkies who are the actual NIMBYs (to use their oft-repeated taunt) or worse as they oppose the community-friendly option simply to make a bigger profit?

As a respected correspondent, unaffiliated with the local campaigns, wrote to me, the use of NIMBY “is divisive and ultimately destructive. Those who use it are counter-productive … It has little to do with the real issues at hand [and] those who use it tend to be delusional in their thinking. Simplistic solutions work for them.”

I suggest that we invoke a form of Godwin’s Law here. Godwin’s Law states that in any given internet discussion, someone will eventually bring up the name of Hitler and that will bring the discussion to a halt. I propose that in any discussion of development anyone who uses the term NIMBY be castigated and ostracised as having no further useful argument to make.

Lets be done with jeers and taunts and get on with the business of building our city.

Night Music: Wind Beneath My Wings

The so-called Easter Rising began one hundred years ago today led by Padraig Pearse and the Irish Republican Brotherhood. Joined by the socialist Irish Citizens Army under James Connolly and scores of militant women of the Cumann na mBan, they seized the General Post Office in Dublin and declared the independence of Ireland from Great Britain. Smaller uprisings took place across Ireland.

The British Army crushed the rebellion in less than a week and about 500 people were killed in the fighting.  Pearse, Connolly, and thirteen others were executed after summary courts martial in May. The Commandant of the 3rd Battalion, Eamonn de Valera, survived in large part because of his American birth.

While tactically a defeat, the direct action of Rising led inexorably to the establishment of the Irish Free State in 1926 and full independence in 1949.

Earth Day Festival on the Drive

This Sunday afternoon will be the 6th annual Earth Day Parade along Commercial Drive and the Festival at Grandview Park.  Note that buses will not be running along the Drive between around noon and 4pm on Sunday. 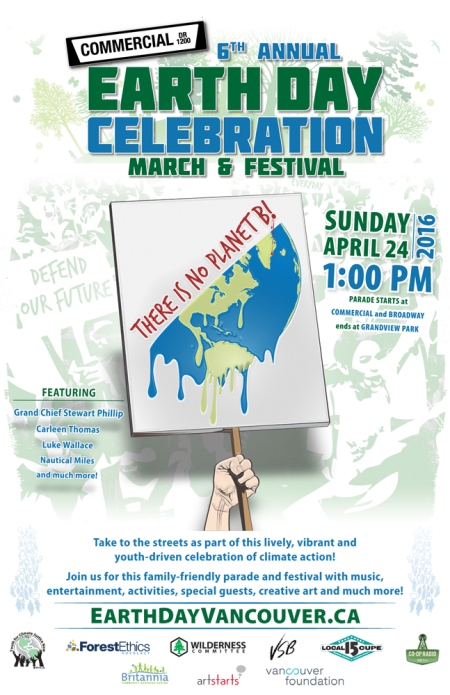