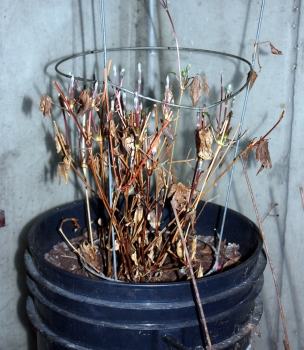 We have a clematis that lives in a black plastic bucket in our covered patio. It has been in that bucket for a good many years. It started with some spectacularly good home-made compost; but since then it has received little care other than a regular watering schedule.

In the fall we cut it back to six inches from the ground. In the spring it comes back to life with green shoots on reddening branches (as now, so early). In summer it will have filled one and one-half walls and windows of the patio, with abundant purple and blue flowers. By fall, it has wizzened to a golden crispness, and the cycle moves on.

It is a continuing joy each year, and I am glad to see it start once again.

As people who know us will recognize, neither the ever-loving nor I have a cell phone — dumb or smart.  In fact, I have never had one.  There are two main reasons for this.

First, I am of the generation where we used to relish leaving the office a few times a day because that gave you a respite from the ever-ringing telephone. You knew that when you locked up the office or store at night you were free from business distractions; that urgent calls would be dealt with in the morning.  I liked that throughout my 40-year business career, and I still like it. When I am at home, I answer the phone if it rings. When I leave the house I know people will call again, or not as they see fit.

A more serious reason has to do with my life-long aversion to being stalked and tracked by the government. Since they were first introduced into polite society, with grand fanfare and huge marketing budgets, I knew that mobile phones would become the electronic shackle that would be used to divest the population of the last shreds of privacy.

Friends and acquaintances have always poo-pooed my “paranoia” on this subject. They dismissed my concerns when retailers began sending their phones ads for stores they were physically close to (if they are not tracking your movements how coulkd they do that?). However, it is no pleasure to find clear proof that I was right to be concerned from the beginning.

The Attorney-General of Maryland says straightforwardedly that people voluntarily give up their rights to privacy simply by switching on their phones. And he is not alone.

Now the state of Maryland is saying that simply having a cell phone switched on is enough to nullify that protection, something which police, prosecutors and courts have hinted at before.

That may not be the worst of it:

It’s possible to track phones even when they appear to be off. Malware reportedly used by the FBI and NSA can put a device into a low-power state when it’s switched off, allowing it to continue reporting its location to nearby towers. And since most phones no longer have removable batteries, there’s no way to be certain you’re not being tracked.

I actively like the “inconvenience” of being out of touch with the electronic world while I walk, or shop, or doze on the bus. And I really like the idea that they need to a lot more work to track me than just listen to my phone.