Hansel & Gretel Is a Triumph!

Last night the ever-loving and I had great seats for the opening night of Replacement Theatre’s third annual East Van Panto. This year the story is based on “Hansel & Gretel” and it is a wonder to behold what Charles Demers and the team have done to the story. An almost full York Theatre audience thoroughly enjoyed themselves from beginning to end, with cheers and applause punctuating every skit and song.

“Hansel & Gretel” — with its child abuse, abandonment, and cannibalism — doesn’t seem to lend itself to lighthearted seasonal bantering for children of all ages. But Demers’ script, Veda Hille’s enhanced music, and the cast’s energetic performances brought everyone to their feet time and again.

It all seemed a lot more together and tight than the first two years (much as I loved those too) and some of that comes from the strength of the role given this year to the Husband/Gingerbread characters. More than earlier years, I think, this took some of the strain off Allan Zinyk having to play the Dame role alone as the heavy comedian. The other significant enhancement has been the choreography, which was marvelous and performed with great verve. the drummer adds to Veda’s already extraordinary range.

It was good stuff and made us very happy indeed. An evening well spent. 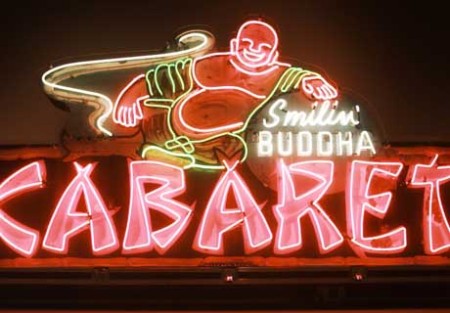 Vancouver was for a long time known for the quality and quantity of the neon signs that decorated buildings throughout the city (see this Vancouver Sun story, for example.)  When I first arrived in 1979, there were still considerable amounts of neon downtown and eastside.  But they are few and far between now, and those that survive are treasured.

It seems suitable therefore that we should celebrate the 105th birthday of the neon sign today.

The birth is generally agreed to be the display of two 12 metres (39 ft) long bright red neon tubes at the Paris Motor Show on 3rd December 1910 by George Claude’s Air Liquide company.  This was an air liquefaction company that produced the first industrial quantities of neon gas as a by-product of their process.  Two of Claude’s patents are still integral to the production of neon signs.  Neon arrived in the United States only in 1923 when an auto dealer in Los Angeles spent $2,500 for two “Packard” signs.  But it quickly took off, becoming a mainstay of street decoration on Main Streets across the continent.

By the 1980s, perhaps even the 1970s, the plethora of neon signs in some cities began to be seen as trashy, and their popularity quickly faded.  Some businesses — beer sellers, for example — continue to use a lot of neon, and neon in moderation is coming back into fashion — or maybe that’s just wishful thinking.