Residential Sales in Grandview This Year

Someone very kindly sent me the detailed listings for 106 residential house sales in Grandview so far this year (to 27 October). Being OCD, I had little option but to analyze them in some small way.

This graph is a chronological view of asking prices, sales prices and a moving average: 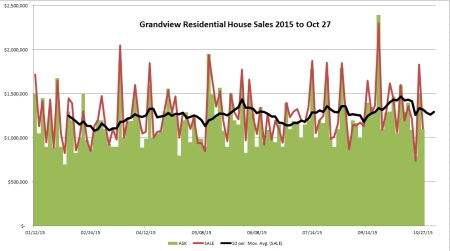 Nine houses were sold at the asking price, 35 were sold for less than asking, and 62 were sold above asking.

I hope this analysis might be useful for those who can understand the figures better than me.  My interest is in the historical record.