Changes On The Drive #42

I decided to do my walk on the Drive a day early this month as tomorrow is supposed to be a real soaker.  Today was overcast and chilly, as we should expect this time of year. After about three months of quiet stability, retail and building change is suddenly everywhere on the Drive.  As usual, this report will move from south to north down the Drive.

The last available storefront in the Marquee Building at 2090 Commercial is still vacant.  All the others in that development seem to be thriving.

The small building and the Drive’s last surviving lawn at 2064 Commercial are up for sale, for $3.2 million. 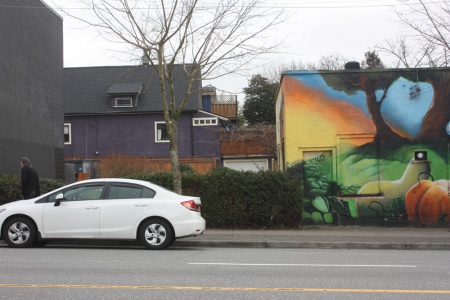 The building was erected in October 1945 by Norman Gregory and Stan Brewer for their new venture called Atomic Transfer. This is no doubt one of the earliest public uses of the word “atomic” in Vancouver. The building was sold to Charlie and Jean Russell in 1951 when Atomic moved to 2145.  The Russells had run their Walkinay Wood Works in half the building since 1947, and they stayed as successful cabinet makers until the 1990s.  Mrs Russell, now over a hundred years old, was still living there until very recently

The Prado Cafe, with its fine parklet patio at Commercial & 4th is opening another branch in February. The new location is at 100 W. Hastings.

The Brandon Block at 1731-1739, perhaps my favourite building on the Drive, is still a mess as the owners renovate. JNZ Meats is still closed as a result. There was originally talk of putting in a new basement, but the upstairs apartments are now also stripped. They were known to be very affordable suites, but I am guessing that won’t be te case by the time this work is completed.  This is not the first time the Block has been altered. In 1913, the entire building was moved back seven feet to widen the Drive.

Strawberry Bakery, the very popular spot in the space between Mercato Mall and SuperValu has closed at the end of January. The owner decided to get married and move to Germany, I understand. 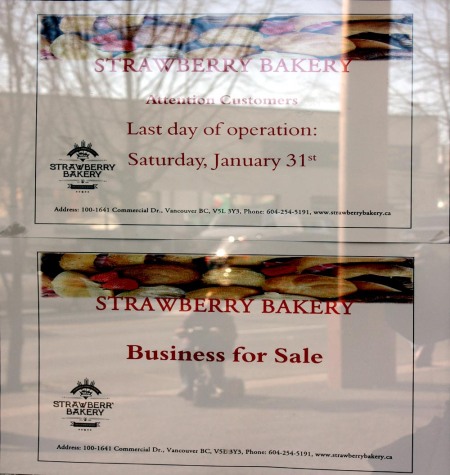 The Odlin Block at 1608-1612 Commercial is still for sale at $3.2 million.  The building’s early history can be traced here.

The storefront at 1458 is still closed but a sign says to soon expect the opening of the Bonvita Health Wellness Bar.

Last June, in Changes #34, I noted the Scandalicious waffle house at 1340 Commercial had opened a new branch at 25 Victoria.  Well, now the store on Commercial has closed, leaving the Victoria Store as their main place of business.

Beckwoman’s, a fixture at 1314 Commercial since 1989, suffered a devastating fire on 24th January.  The interior of the store was damaged but luckily neighbouring buildings, including the historic BC Mills house behind the shop were saved from the blaze.  Early reports are that the fire was caused by an old light bulb that burst into flames and set fire to the draperies hanging nearby.

It is impossible to tell from the street but there is a large hole in the roof caused by the fire, and the water used to douse the blaze damaged a floor that was already weakened. Given what I am told, that the store has a history of code violations, the new damage may well require the demolition of the building that was erected in 1930 by Fiore Marini to house his shoe repair business. I also understand that power has been cut to the suites in the BC Mills house behind and so the three renters will have to find accommodation elsewhere.

I hear that a number of nearby businesses have rallied to help Bonnie Beckman get through this trauma. She has been a fixture on the Drive since opening her first store at 1319 Commercial in 1981. She moved to her present location in 1989.

The storefronts at 1268 and 1108 are still vacant, with no sign of upcoming use.

Numerous rumours about what is going into the old Florida Market at 1102 have been settled.  It will be a coffee shop and roaster called Moja Coffee.  It has been designed by a San Francisco architect. Date of opening is still to be announced.

Drive Organics at 1045 has been sold to Choices Market.   The rebranding will take a few months, they say.

The Liquorice candy and hula hoop store at 1002 Commercial managed to get some good publicity this month with the introduction of choloate snorting. There was a story in the Province and I believe they also got a spot on Global TV.  Good for Watermelon and her people!

The Shibuya Restaurant at 952 Commercial is still not open. The sign on the door says they are “renovating” but the pile of mail and flyers inside the door indicates that no-one has even gone in the shop for quite a while.

The old sandwich place at 907 Commercial has completed its renovation and the new Kin Kao Thai restaurant is expected to open any day now.  I’m looking forward to that.

Finally, and just off the Drive west on Venables, the old Prop House is being redesigned and repurposed with relatively inexpensive spaces for artists, writers and others.   That could be an excellent addition to the neighburhood.

Quite the month, eh?

Previous Changes on The Drive posts.