Today’s the day that Famous Empty Sky previews her new exhibition on the Drive.  The details are on the poster below. 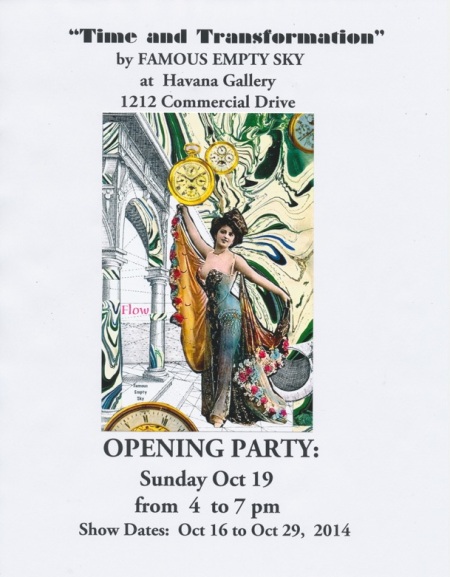 Please check out her show.  It is guaranteed to be interesting and, as one of our very finest local artists, she deserves all our support.

A Lack of Vision On The Broadway Corridor

Vision Vancouver, the developer-funded incumbent regime at City Hall, have decided to make a subway under Broadway, from Commercial to UBC, a major plank of their re-election campaign. Apparently it is beside the point that they don’t have the money to do it, nor any control over the funding, and that it is a bad and unimaginative idea, suited only for the profits of the regime’s crony partners. A subway we shall have, they say.

Let’s begin by looking at some of the yawning gaps in Vision’s proposal.

First, to claim this is a subway to UBC is simply false.  The subway, as currently proposed, will be dug from Commercial & Broadway only to Arbutus where westbound commuters will have to leave the subway, climb up to the street level and then wait for a bus to UBC to complete their journey, one way.  So, any commuter time savings discussed must take into account the time and inconvenience needed for this transfer. And, of course, the same inconvenient transfer will be necessary when leaving UBC to travel eastwards.

Second, all expert opinion suggests that putting the financing together and then building the tunnel will take eight years at least before delivering one second of improvement.  I suppose we must hang around in long lines waiting for an already-crowded 99B Line for another eight years, as there are no plans to improve the service before then.

In fact, under Vision’s plans for Commercial & Broadway, the commuting situation will get much worse.  They plan to add about 10,000 more people to that neighbourhood, mostly housed in huge 30+ storey highrise towers at the intersection, without any increase in transit. Those 10,000 people will simply add to the congestion and line-ups that already annoy so many travelers; and which can only be aggravated by years and years of subway construction work.

Third, what would this new communter paradise look like?  Under Vision, there is little doubt Broadway will consist of islands of massive towers separated by barren wastelands between the stops.

Even the pro-subway Urban Land Institute, in their Final Report in July, warned that Vision had gone hog-wild over towers. It is worth noting that there will still need to be street-level buses to move people between the stations and their high-rises; so the subway becomes not a replacement, but simply a very expensive addition.

Finally in this review, let’s take a moment for an overview of this $3 billion, 8-year project: Question: did you ever see a government-run mega project go over-budget and/or over-schedule?  I can’t think of one that didn’t.

So, after all that complaining, are there alternatives?  Yes, of course. And there are alternatives whether the $3 billion falls like manna from heaven or whether we have to do this without such largesse.  The prime failure of Vision’s plan is its lack of imagination.

For example, should that kind of money be available, Patrick Condon (who elsewhere has pointed out the contradictions in Vision’s plan) has already described the magnificent transit system we could have all across Vancouver for the same cost of $3 billion that Vision wants to waste on a single line between Commercial and Arbutus. Why would we not want to improve service everywhere rather than service a small slice of our needs?

What else?  We could move large sections of UBC to, say, the Post Office building downtown, and the Emily Carr site on Granville Island.  This would spread the transit load geographically and, at least in the case of the Post Office, would build upon existing transit infrastructure.

And/or we could insist that UBC and the high-tech companies the Mayor and Geoff Meggs have said will dominate the Broadway corridor move to flex-time scheduling, thus spreading the traffic load across the system throughout the day and thus reducing “rush hour” congestion.

And/or we could divert automobile traffic off Broadway to 4th, 12th, 25th and 41st, for example.  Personally, I would be happy to see the entire Broadway corridor become a pedestrian/transit/cycle-only street.  A mix of short-haul and express buses would speed along their own dedicated lanes, as would bicycles, feeding retail along the entire street rather than just in towering shopping centres.

Finally, we can consider alternative technologies for moving people along Broadway.  An at-grade Light Rapid Transit system, costing about a third of the tunnel project but going all the way to UBC, is an obvious candidate.

There are plenty of other ideas floating around.  What we know is that the three billion dollar hole in the ground is the least viable, the least effective, and the least neighbourhood-friendly option and, besides, it cannot be ready for almost a decade at best.  It is time to be creative and make better decisions for our commuters and our City today.