Our neighbouring district of Mount Pleasant is holding an important election meeting on Monday. 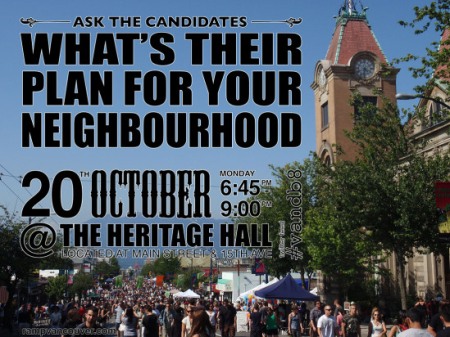 Everyone will recall the right-wing attempts to force Obama from office as US President on the basis of false stories about where he was born, the status of his Kenya father, his birth certificate, etc.  Donald Trump and the Fox News yahoos were probably the loudest proponents, but enough other people sucked up the Kool-Aid to make it an enduring meme in the last election and beyond.

Setting false trails is an old political trick from the dark side of politics that Vision seems to favour.

They choose to denigrate that glorious connection by suggesting that someone who lives on the UBC Endowment Lands is unworthy to be Mayor of Vancouver. Even though the law says it is OK, and even though most Vancouverites consider it to be part of our wonderful City.

This is pure partisan politics at its dumbest.

If Vision and others have a problem with the structure of the Vancouver-UEL relationship (and I share many concerns about that including lack of taxation and lack of representation), they should take it up with the powers that be and settle the matter.  I dont recall this issue being a priority during the last six years of Vision Vancouver’s regime — or did I miss something?