Changes On The Drive #38

First day of October, perhaps my favourite month, and the weather was absolutely perfect — sunny and just a bit warmer than cool.  The street was busy, folks seemed happy; good stuff.

Not a great many changes in active storefronts this month.  In the Marquee Building down at the south end, the proposed Lebanese restaurant, Jam, at 2280 Commercial, is still not open.  But the Vap Lounge next door at 2260 is now open for business.

Over the last short while, the old Canadian Legion building at 2205 has been spruced up to a wonderful degree.

The clean blue with orange trim really stands out, and the illustrations (the vet with his shadow, and the poppies) are beautifully handled.  Around the corner on E.6th, a new mural is gradually being brought to life.  When completed, it will show a series of detailed vignettes.  Excellent work! 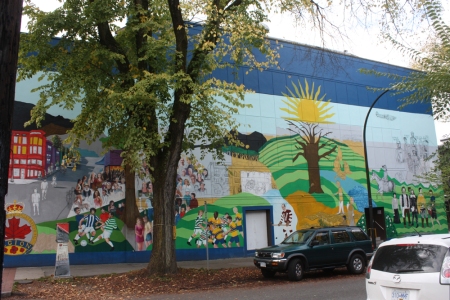 Talking of murals, the side-street wall on the building on the SW corner of Commercial & 5th used to have a glorious image of swimmers.  This was badly vandalized earlier this summer, but has now been re-imagined.

On First Avenue, just to the west of Commercial, the old Salvation Army building is for sale. 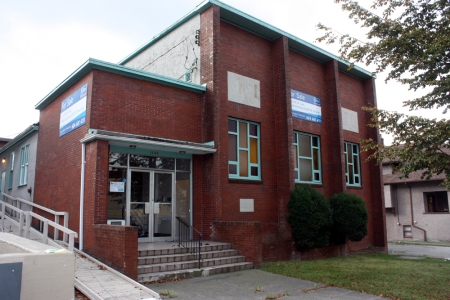 It is a perfectly good 8,000 square feet, but I am sure we will soon see a residential development, maybe with more retail at ground level.  In the Community Plan maps distributed last year, this lot would be zoned to allow 6-storey apartments.  I’m guessing we will have to wait until the zoning in the Community Plan is fixed next spring until this moves ahead.

Moving north, I haven’t before mentioned that Columbus Travel is now above Black Dog video at 1460.  They may have been there a while and I only just noticed (my apologies if that is the case).  They have been in business on the Drive since 1974. 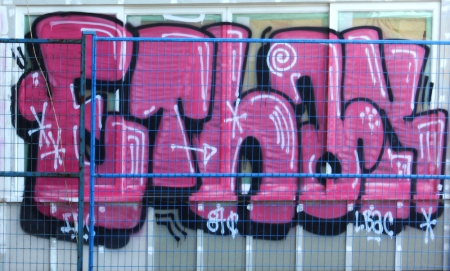 Like it or not, this is a fine piece of work, especially as the surface is not flat.

Finally, the vacant office space above Penelope’s at 1107 Commercial has become yet another medical cannabis business. 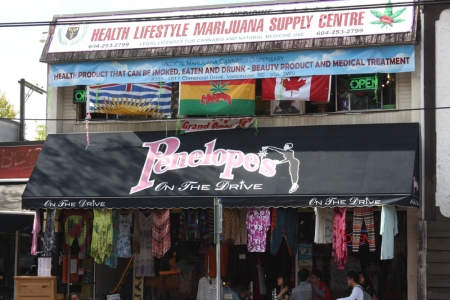 We have at least half-a-dozen of these on the Drive now.  In addition, the venerable Coastal Foods store at 1961 has essentially become a bong shop that carries a few groceries.  I’m perfectly happy with folks selling dope on the Drive, but, just as I think we have enough restaurants, I also think we’ve probably reached a more than reasonable level of weed dispensaries.

Previous Changes On The Drive posts.