Fish In A Box

I don’t use a mobile phone, not even a dumb one. Never have. I grew up in a time when leaving the house or the office was a chance to get away from the phone, to escape from whatever pressures could come down the line. A chance to relax a bit. I liked that. Still do.

However, what that means is that I like the idea of phone booths on the street — and those are disappearing quicker than quick.  In fact, in most places they are already extinct.  Which is a major problem for people like me who chose not to have a smart phone or who simply cannot afford one.

Most phone kiosks get dumped in the landfill, I guess, although the traditional red British box can sometimes be seen as a tourist draw. In one place in Japan, however, someone decided to turn one of them into a public aquarium. 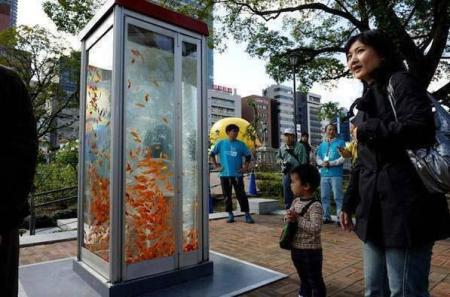 I would rather have a phone in there but this is a seriously creative idea.

This entry was posted on Wednesday, August 28th, 2013 at 9:18 pm and is filed under Memoir. You can follow any responses to this entry through the RSS 2.0 feed. You can leave a response, or trackback from your own site.

4 Responses to Fish In A Box