Earlier this week I had a delightful lunch with JoAnn Bufton, granddaughter of Catherine Bufton who was such a force in the development of Commercial Drive. The Buftons, through three generations, operated a highly successful florist shop on the Drive from the 1920s to the 1980s, and were thoroughly engaged in the social development of our neighbourhood.  If the Drive had royalty, it would be the Buftons.

JoAnn Bufton grew up in the neighbourhood in the 1940s, 50s and 60s, living for some time with her family above what is now Havana’s and was then Fera’s Heating.  She attended Templeton and Britannia School and was a genuine local girl. 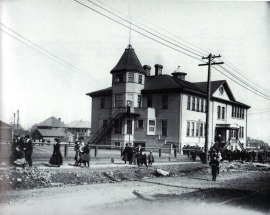 She and her younger brother Hugh would go to the Grandview Theatre where a ticket cost 15c and popcorn was a dime.  On other days, between the time Grandview School of Commerce at First & Commercial was closed and when it was demolished in the early 1950s, they would play in the empty old “eerie” building.  JoAnn told me that the ice cream at the Crystal Dairy (where Wonderbucks is now) was just as good as they promised, and she remembers the horses that delivered milk who were stabled behind the Dairy.

In an earlier book I had written about how she took a long trip with her grandmother, the “formidable” Catherine. I had assumed they travelled together but, in a sign of the times, I guess, old Mrs. Bufton travelled first class on the boat to Europe while JoAnn was in economy and had to get special dispensation to visit her grandmother.

It was a marvelous lunch, at Fet’s of course, and we talked for a couple of hours, full of questions. The joy of being a historian!