I spent the middle of the day with good friends helping to put up the Grandview Heritage Group’s 2013 Centenary Celebration House signs.

This is our second year doing this, and I am sure it is one of the best ways we have of encouraging a deeper recognition of the marvelous hundred-plus-year-old houses that are all over the Grandview village.

** Grandview & The Drive, History and Heritage |

Changes On The Drive #20

What a fabulous day to go walking on the Drive today!  It was a perfect Drive day — warm, sunny, patios overflowing and a million tats on view.

There are just a few vacant stores on the Drive this month, mostly down at the north end:  1181 (where Spank Shoes used to be), 1044 (was Ewaz), and 1046 where the former Tony’s Deli is still — surprisingly — shuttered.  The former Pink Elephant at 1748 is also vacant, but it seems that work is going on inside, so we can expect a new store there shortly.  The interior of Il Mercarto Mall on the south side — where Metropolitan Insurance and the Wakaba Japanese place used to be — is also completely vacant.

However, Metropolitan Insurance has taken over the old DQ space on the Commercial Drive frontage of the mall, which makes that side look a lot more lived in.

I am also unsure what’s happening with the Action Framing store at 2055 Commercial.  The front of the store is completely empty, though the framing desk at the back is still there.  Perhaps, hopefully, they are just redressing the front display.

There are a number of changes on the 1800-block.  What used to be Isshin Sushi at 1861 will soon be Volcano Sushi, and next door at 1859 the Ya Ya Restaurant is now the Bua Thai.

I have already noted the opening of the new furnishings store — Exposure Home — in the 1600-block.  I’m glad to see that they now have their new sign in place.

And the typeface of the sign makes it clear that Exposure Home is connected to the Exposure clothing store that has successfully held down the Charles and Commercial corner for a few years.

Earlier this month I wrote about the almost-new restaurant, La Patrona Eatery, at 1344. Take another read.

The Ten Thousand Villages store at Commercial and William is closing at the end of the month.  No reason given: another victim of rent inflation perhaps? 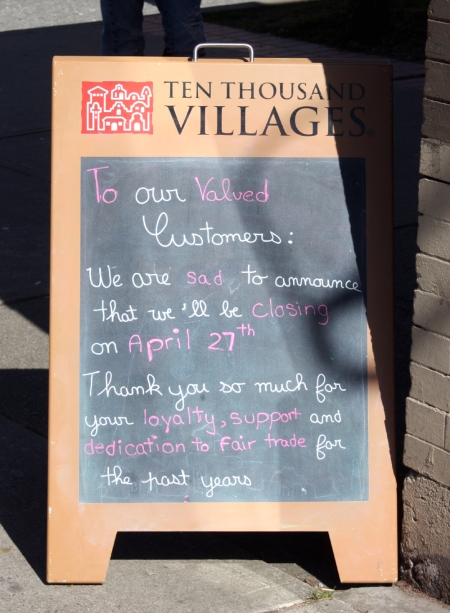 We also have news going on on the Drive:  there are “anarchists” (more likely, nihilists) attacking the Famoso Pizza place at Commercial & Kitchener; and, of course, there is the on-going controversy of the Daily Catch food truck.  Hopefully the attacks against Famoso will stop soon, but I am guessing we’ll still be arguing about the food truck for a while yet.

Earlier editions of Changes On the Drive.

“Isn’t it appropriate that April, the month of taxes, begins with All Fool’s Day and ends with cries of “May Day!”