Changes On the Drive #4

Another stunning day to walk the Drive and see what’s changed this month. The weather was cool, sunny with not a hint of rain or wind.  Great stuff!

The old Leira Cafe (1997 Commercial) is still vacant (that’s been several months now), as are 1840 and 1830 Commercial, the former Dairy Queen in Il Mercarto, and the Sumo Teppanake place on the corner of Commercial & Graveley (all the equipment and ephemera seems to be still in place in the restaurant, which is odd as it has been a couple of months since it closed). The only new vacancy found was the former Merchant of Dreams shop at 2137 Commercial: 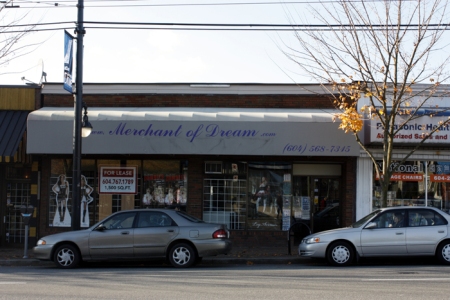 However, some empty spaces got picked up:  The previously vacant 1914 Commercial is being developed as a 4Brothers Pizza joint.  This is right next door to the Fire Pizza joint. And the former La Goulett at 937 has been taken over by Windjammer Fish & Chips with plans to open this month. 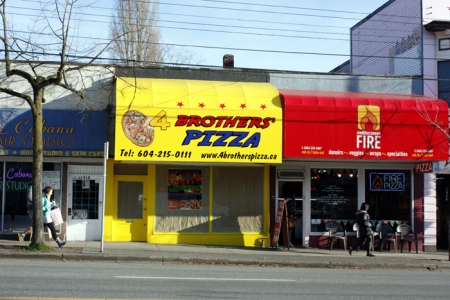 The Far East Building south of 6th is still being re-developed (it is amazing the credit union can work through all that!). Falconetti’s Deli at 1806 Commercial isn’t open yet, but work has started on the Liberty Wines store in the old Waazubee site: 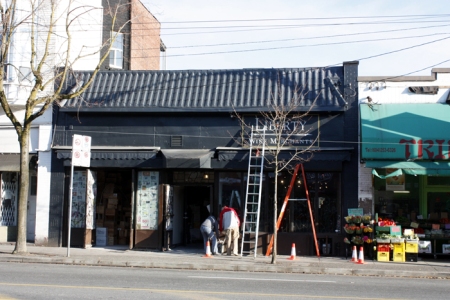 Given the position of the sign, I am still not sure if they are using both parts of the storefront. The northern half still has “For Lease” signs.  Meanwhile, Renzo’s old place at Commercial & Charles seems to be nearing completion of its transformation to a cafe. No indication of an opening date yet.

The Brandon Block is still distressed; heavily scaffolded and draped.

The “For Sale” sign has come down from the old Medical Building on the 1300-block.

A & B Rental at 2223 Commercial has announcements on the windows that they are moving to Clark Drive in the New Year.  That space has housed a rental business of one kind or another since Rentomatic opened in 1980. They were followed by A-Z Rental, Best Rent-It, Able Tool Rentals and finally A & B. Before 1980 it had been a series of restaurants since it was first built in 1946 or so.

Finally, the old York Theatre at 637 Commercial has seen some heavy remodeling this week.  Built in 1913 as the Alcazar movie house, it served 54 years for the Little Theatre Company under the name York Theatre, and then became the Raja cinema which specialized in films from India. It closed for good a couple of years ago. The following image shows the Alcazar, the York, and the Raja.

Under a Federal scheme, the theatre is being rebuilt and will be re-born as the new York Theatre.  This is what it looked like today: 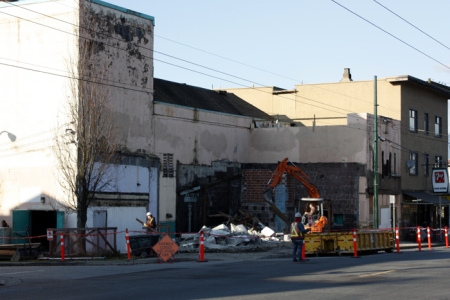 Previous Changes on the Drive posts.

I have mentioned in a few earlier posts that a number of local historians and others interested in the heritage of Commercial Drive and Grandview have been getting together since the spring to share information and discuss local issues. Now, we go official with a website of our own:

We plan to make the site a place well worth visiting on a regular basis for news and history of Commercial Drive and the Grandview neighbourhood. The site also has a useful set of links to additional resources.

Come visit, and let us know about any heritage or historical questions and issues you may have.

** Grandview & The Drive, History and Heritage |