It was Earth Day yesterday, and a youth group organized a parade along Commercial Drive followed by an event on the Britannia HS playing fields.  This was the first of what they are talking about making an annual event.

I was a bit late and caught up with the group when they had arrived at the school grounds — and I forgot to shift my camera from b&w mode to colour.  The event was nothing if not colourful and so the following images will be impressionistic only.  First, we have the organizers — and bravo to them.

Although the named organizing group was supposedly non-partisan, this was clearly an NDP event, with the entire field marked out with NDP election lawn signs.  Quite a few folks in the crowd were also carrying NDP placards. There may have been a Green or two, but the speeches — by Libby Davis etc — and the crowd was definitely leaning to the New Democrats.  Here is NDP MLA Jenny Kwan standing with some other freaks (who were REALLY colourful, believe me!) on the left:

The opening entertainment act were “Maria In The Closet” (?) who were joined out front by some very colourful (honest!) dancers with placards. 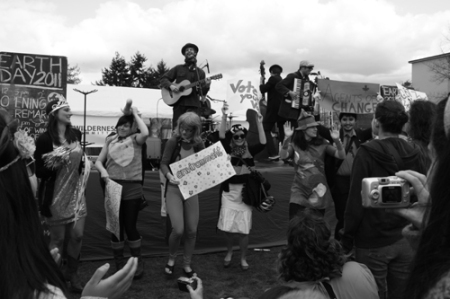 It looks like it was a fun event, enjoyed by a few hundred folks.   ‘Tis the season for street events and I look forward to more.