We visited the Chinatown Night Market on Keefer Street tonight for the first time in a number of years. It was a huge disappointment. As I recall it from before, the Market stretched the two blocks on Keefer from Gore down to Columbia, with a break for Main Street. Tonight the entire action was on the single block from Columbia to Main, and the booths were not squashed together either. I guess the night market in Richmond has drawn away some traffic, but still we were surprised.

It looks fairly busy, but in all honesty it wasn’t. Probably half the stalls were food vendors, and not all of them were Chinese. There was the potato tornado, for example: 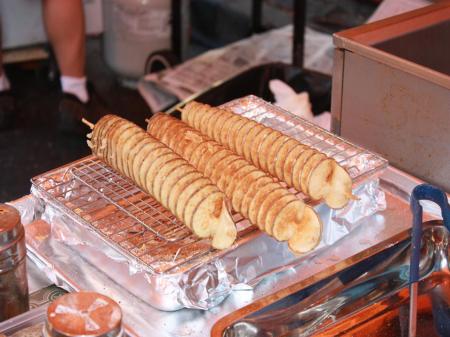 The bra stall was still there, as were the cheap jewelry stands. And I did find some pretty Chinese umbrellas, but there was not much else.

The Keefer block between Main and Gore was dead at 7:00pm. Very sad as it used to be so lively on Market nights. We couldn’t even buy custard tarts because the bakeries were already closed. I read that Hon’s Restaurants, the main branch of which is in that block, is in serious difficulties and I can imagine that to be so. In the old days, the Market must have brought them a lot of business. But not now. It was all rather sad.

This entry was posted on Friday, August 20th, 2010 at 9:26 pm and is filed under -- Places & Spaces, Memoir. You can follow any responses to this entry through the RSS 2.0 feed. You can leave a response, or trackback from your own site.