Marketing On The Fly

I am a marketer at heart, and I really appreciate those who extend themselves in thinking of novel and memorable marketing ideas. Thus it was impossible for me not to be impressed when a German group recently used banners tied to houseflies to send their message. The report and video from Wired:

The banners, measuring just a few centimetres across, seem to be causing the beleaguered flies a bit of piloting trouble. The weight keeps the flies at a lower altitude and forces them to rest more often, which is a stroke of genius on the part of the marketing creatives: the flies end up at about eye level, and whenever a fly is forced to land and recover, the banner is clearly visible. What’s more, the zig-zagging of the fly naturally attracts the attention because of its rapid movement.

Clever stuff for a stunt!

Ridding Ourselves Of Cars

Low-Tech magazine looks at bicycles this week, and concludes that cars have to go.  Boy, I couldn’t agree more.

The problem is not that there is a lack of good roads – enough of these exist to bike from here to Mars and beyond. The main problem is that these are occupied by automobiles that are not only dangerous but also very inefficient both in terms of energy use and floor space.We don’t need any new infrastructure, what we need is to clear the existing infrastructure of inefficient vehicles and replace them with efficient ones. In other words: give all streets, highways, cloverleaves and motorways exclusively to bicycles and all other human powered wheeled vehicles. Get rid of cars. Why make things so complicated if the solution is so simple?

How could we live without cars, I hear those trapped in skepticism say.  The answer is clear:

Picture this for a second. If cars are gone, we are left with pedestrians (on the sidewalk), pedal powered vehicles (one part of the streets and the highways) and public transportation (another part of the streets and the highways, separated from pedal powered traffic, or underground) … For long distance passenger transport, we have trains. For long distance cargo transport, trains again. Short distance cargo transport could see the revival of cargo trams (streetcars). Electric vehicles could be a part of the solution, too, both for cargo transport and for the disabled, provided they keep the same speed as bicycle traffic.

The whole article is well worth the read, and the possibilities should be lightly discarded.

Here’s a really good socially-responsible idea that saves energy and returns the night to the dark it should be.  Reported  from the Guardian:

The lights are going down in Toulouse. Tomorrow early-rising residents of the Allée Camille-Soula in the south-western French city will have set out to work with the morning gloom held at bay by radical new technology which turns on streetlights only when pedestrians pass.   Installed on a 500-metre section of pavement last weekend, the lampposts double the strength of the light they cast when they detect human body heat. Ten seconds later they revert to normal.

“It’s a prototype. Nothing like this exists anywhere in the world. We pretty much built the technology ourselves,” said Alexandre Marciel, the deputy mayor in charge of works, highways, sanitation and lighting. The aim is to cut energy consumption by around 50%, first on the busy street which runs between a sports stadium and university halls, then more widely. If it is a success, it will be rolled out across the city of around 450,000 people, France’s fourth largest …

There is a growing campaign in France against nocturnal light pollution. Last weekend saw countrywide demonstrations against the contamination of the night sky by urban lighting. “Concern started just among astronomers and other specialists but is now getting much more mainstream attention,” said Clara Osadtchy, one of the organisers … Cash-strapped and increasingly environmentally conscious communities are now trying to cut electricity consumption. Many cities have changed streetlight bulbs for less wasteful models. After years where cheap tariffs and plentiful power meant all-night lighting, smaller rural communities are returning to earlier practices and turning off streetlights after midnight …

Earlier this year the German town of Dörentrup started turning off its lights at 11pm, with its 9,000 residents able to illuminate a specific street for 15 minutes by dialling a special mobile phone code. The local utility company estimated the scheme would cut Dörentrup’s carbon emissions by 12 tonnes a year. Early trials showed that many streetlights were switched on only two or three times a night.   Marciel, an elected official from the Radical Left party, has grand ambitions. “Imagine if instead of thinking of movements in town as consuming energy we thought of ways they could generate energy instead. The possibilities are without limit,” he said. One project under consideration is to connect dynamos to the thousands of free bicycles available in Toulouse. The energy they generate could then be “harvested” overnight and used for streetlights or the national grid, Marciel said.

Just a little while ago, I was congratulating myself on 8 years of blogging. But the truth is, I haven*t been here in some months. I had been drawn away, first and foremost, by Twitter. After that was dealt with each day, I had neither the time nor the energy to sit and write blog entries.

And that seemed OK, for a while. However, after a month or two, it became evident to me just how much time I was spending trying to keep up with my Twitter feeds, how little else I was doing online, and how the novelty of Twitter had worn off. Last week I just had to shut it all down. For some days I didn’t look at Twitter at all — and I survived! I even found time to read other stuff. Wow! What a revelation of what I had been missing.

And as I started to re-visit the lively politics, arts and science sites that used to be my daily fare, I had more and more desire to share some of this stuff as I used to. And to write about it. Last night, as I rebuilt my Daily Bookmarks list, it was a joy to see some of those sites again. Made me excited after what I recognize as the torpor that Twitter induces.

My daughter in England and I have found Twitter to be a very useful way of keeping us in touch each day; and so we’ll continue to do that. I’ll spend some time winnowing down my Twitter “following” list to just those dozen or so artists that I’ve enjoyed interacting with. And that will be that for Twitter.

I have written many times in many places how much I dislike nearly all of Damien Hirst’s oeuvre. And I have been rewarded by having to watch him become the first art billionaire. But finally, the hens may be coming home to roost. Look at these reviews of his latest exhibition…

Rachel Campbell-Jones: “The paintings are dreadful. Think Francis Bacon meets Adrian Mole. So why are these works now hanging in the Wallace Collection? What are they doing in the home of such masters as Rembrandt or Poussin, Titian or Fragonard? The answer is simple: they are by Damien Hirst. Take a step farther and a pale, silk-papered boudoir transforms into what feels more like a teenage boy’s bedroom. You can almost smell the brooding odours of existential angst. The artist who has made his reputation with shock now produces works that are shockingly bad.”

Tom Lubbock: “Damien Hirst has painted some paintings, entirely by hand. So far he has made his name with other kinds of art: with assemblages, mainly involving dead animals and pills, and paintings, painted by other people. But now he has risked his fame, with some paintings done by his own hand. They’re thoroughly derivative. Their handling is weak. They’re extremely boring. Hirst, as a painter, is at about the level of a not-very-promising, first-year art student. He is in his mid-forties. ”

Sarah Crompton: “The problems with the exhibition begin when you study the paintings themselves. Although they have impact as a group, individually many of the paintings simply don’t pass muster. Details are tentatively painted; compositions fall apart under scrutiny. So it is brave of him to begin to paint in this way — but anyone who first encountered Hirst through these works would be entirely justified in wondering what all the fuss had been about.” 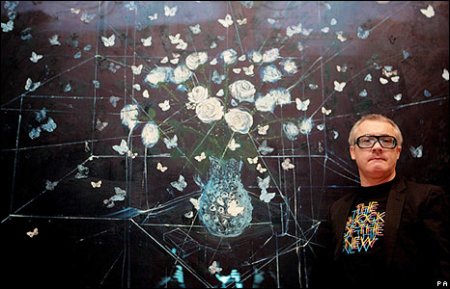 Adrian Searle: “Damien Hirst’s paintings are deadly dull … Hirst’s paintings lack the kind of theatricality and grandeur that made Bacon succeed. At its worst, Hirst’s drawing just looks amateurish and adolescent. His brushwork lacks that oomph and panache that makes you believe in the painter’s lies. He can’t yet carry it off. Whatever his borrowings, Hirst did all this himself, unaided by his armies of assistants. He fills up his art with dead things: even the iguanas look stuffed. But these paintings are a memento mori for a reputation.”

Hirst can of course ignore these reviews with a shake of his heavily-laden bank accounts.  But it must hurt, nonetheless.

The next day, the New York Times was asking whether Conceptual Art had jumped the shark tank?  As Dennis Dutton writes:  “I can’t help regarding medicine cabinets, vacuum cleaners and dead sharks as reckless investments. Somewhere out there in collectorland is the unlucky guy who will be the last one holding the vacuum cleaner, and wondering why.”

The International Day of Non-Violence