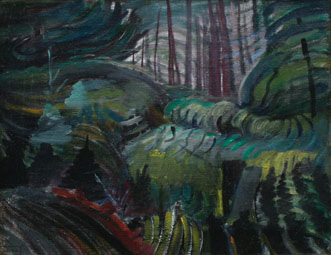 There is so much good stuff going on at the Vancouver Art Gallery this season that is hard to swallow it all.   Luckily, we had already seen the Vermeer/Rembrandt exhibition on the ground floor, so we were able to head straight upstairs when we went today.

The second floor has two shows sharing the space:  Emily Carr and Jack Shadbolt on one side, with Stan Douglas’s photographs on the other.

It has taken me a long time to appreciate the art of Emily Carr.  I was just slow, I guess, and I now accept her as one of the masters.  Her eye is so keen and many of her designs simply radical.  They had a few of her First Nations’ village pictures, which I don’t care for.  But the work in the forest and with totems is exquisite.  I particularly liked a series of charcoal drawings.  I’m glad I have gotten this far with her.

The show looks, in part, at her influence on Jack Shadbolt and his reaction to that influence.  He definitely comes off second best.  In his other works, I just don’t care for the butterfly works; and some of the works looked like over-elaborated Miro paintings.  But an entire wall of large scale charcoal drawings called “India Suite” was wonderful.  As were “Voices” and “Silent Land“.

The other half of the second floor, and all third floor is given over to photographs;  large format works of the BC Interior by Stan Douglas, a wide chronological range of works by Anthony Hermandez of Los Angeles, and others from Andreas Gursky.  There were individual images that were simply superb, but overall I wasn’t so impressed.  A lot of the works touched on themes that I have photographed, especially by Gursky.  Technically, their works are far superior to mine.  But conceptually and artistically, I prefer my stuff.

Running from the ground floor up to the top of the gallery is an installation by Reece Terris consisting of six apartment layouts, one on top of the other, called “Ought Apartment”.  They represent interior design and living from the 1950s to today.  According to the Inflated Phrases of the VAG catalog:

“The work of Vancouver-based Reece Terris focuses on the relationship between constructed architectural spaces and our common experiences and encounters within them. Through amplifications or shifts in the function of an initial design, Terris’ work reconsiders utility in both object and place to create environments that highlight the larger cultural contexts implicit in our built environment.”

Hmmmm.  My gal and I agreed this was a disappointment.  We didn’t learn anything about architecture, culture, or even artistic endeavour from this VAG-commissioned work.

Still, it was a worthwhile visit.  We have a proactive Gallery and Board and they deserves our support.

This is the week that Twitter has come of age, shown its worth, whatever. The coverage out of Iran has been mesmerizing, with Twitter and YouTube being almost the sole non-governmental sources of information after the media crackdown.

If you are on Twitter, look at #iranelection especially.

One of the most fascinating things to me about this new media has been how quickly lies can be uncovered when there are so many eyes watching. For example, earlier this week, the Iranian Govt issued pictures of a pro-government rally showing huge crowds. Within minutes, people on Twitter and elsewhere had shown how those images had been doctored in Photoshop to make the crowd look bigger than it actually was.

With foreign media banned, the revolution may not be televised, but it will certainly be tweeted.