Following up to the update, Ama was indeed promoted to the rank of ozeki today.  At the same time, he changed his sumo name from Ama to Harumafuji. 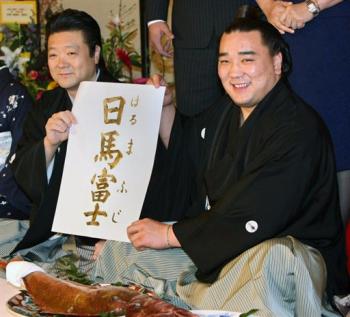 Harumafuji said he would aim for the top rank of yokozuna (grand champion).  “Since I got this great name, I want to achieve results that would take the name higher,” the wrestler told reporters after his formal promotion.

Update:  And now he has won the Emperor’s Cup!

This entry was posted on Wednesday, November 26th, 2008 at 8:08 am and is filed under Other Writings, Sports. You can follow any responses to this entry through the RSS 2.0 feed. You can leave a response, or trackback from your own site.