The Wonders of Advertising Technology

This story is from WCBSTV in New York: 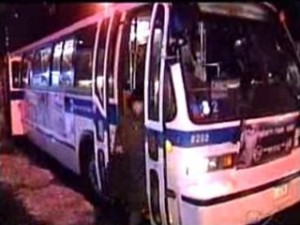 New York’s transit agency is testing digital advertising screens on the sides of buses.  The screens can target ads for specific neighborhoods. The ads, which resemble TV commercials, could even advertise coffee in the morning, and beer after work.  Titan Worldwide has a 10-year, $800 million contract to sell ads throughout the city’s bus and commuter-train systems. The company says GPS technology allows it to change the ads based on the buses’ locations.   The Metropolitan Transportation Authority is testing the system on a Manhattan route, with an eye toward 200 buses in the first quarter of next year.

While I’ve been watching this week’s auctions at Christies and Sothebys, I completely missed the action at the Phillips de Pury & Co sale last Saturday.   It was, say the reports, a complete bust with 45% of the 70 lots failing to sell.  The sale’s minimum total estimate was $36 million, but the actual return was only $10 million.

The biggest shock would have been the utter failure of the Murakami to gather any interest. 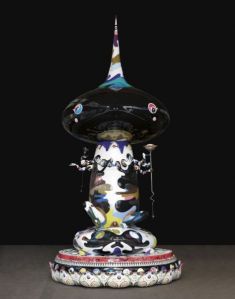 The most dramatic moment came when Murakami’s 21-foot-high Fiberglass sculpture “Tongari-kun” (2003-2004) failed to attract a single bid. It was expected to fetch at least 3.5 million pounds. The Japanese artist, clad in a black puffy jacket, attended the auction and laughed after the lot was passed in a hushed room.

My opinion of Takashi Murakami is not high, and I’m glad to see a check on the extraordinary values his works have attracted lately.  But it seems to have been a more widespread withdrawal of prices rather than a considered jab at artistic taste:

Seated on rows of Philippe Starck chairs, bidders ignored works by leading American contemporary artists priced between 250,000 pounds and 500,000 pounds. Among the casualties were Lisa Yuskavage’s 2003 oil-on-canvas work “Dark Garden II,” a 2001 joke painting by Prince and a pink acrylic work of blank advertising signs from 2004 by Ed Ruscha.   Not a single lot sold for 1 million pounds or more. None of the 10 top-selling works managed to achieve a hammer price above the higher estimate. The top lot, Warhol’s “Flowers” (1964), fetched a mid-estimate 735,650 pounds, going to a telephone bidder. “Cleaning the Pole,” a sensual nude by Marlene Dumas, soon to be featured in a solo show at the Museum of Modern Art in New York, fetched 553,250 pounds, below its high estimate of 600,000 pounds …

A brightly hued, 9-foot-high abstract expressionist painting by Joan Mitchell was another significant flop, with a presale- estimate range of between 2 million pounds and 3 million pounds.  The speculative demand that has recently boosted prices for Chinese contemporary art evaporated. A painting of a vacant-eyed boy by Zhang Xiaogang, titled “Bloodlines Series: A Boy,” (2002) failed to sell. So did a group of bronze smiling figures comprising “Contemporary Terracotta Warriors No. 7” (2005) by another Chinese-art star, Yue Minjun. They were estimated at 200,000 pounds to 300,000 pounds and 350,000 pounds to 450,000 pounds respectively.

The Bloomberg article suggests that this is a tipping point.

“The timing could not have been worse for an auction,” said Michael McGinnis, worldwide director of contemporary art at Phillips.  “The economy is in a somber mood. There was a lot of interest but interest didn’t turn into bids.” London dealer John Austin said it was the worst-performing auction he’d seen since 1991.  “There’s been an awful lot of speculation,” he said.  “We’ve got to get back to the real market where people buy things because they really like them.”

And it is true that the Christie’s and Sotheby’s auctions were also considered sub-par.  Art does seem an obvious choice for pullback in the discretionary spending of the wealthy.  The real sign of a market crash will come, though, only if we start to see the emergency sale of certain major works that have been purchased at inflated prices, by Russians for example, over the last half-dozen years.