Listening To Mayan And Protecting Quechua

The work of making the Mayan language, as found on their numerous buildings and monuments, available to researchers today has been one of the triumphs of linguistic and anthropological research.  Success has only come in the last couple of decades, but the output of completed and ongoing projects has been immense.

It was a thrill, therefore, to fall over the Nova site supporting their TV show’s look at the decipherment of Mayan.   If you follow the link to the Interactive Feature, you can actually hear the Mayan language of a stela dedication spoken while the English translation of each glyph is discussed in brief but fascinating detail.

It is quickly being forgotten that less than twenty years ago, we did not have the technology to make this research available to any but a limited few researchers.  We need to keep reminding ourselves about how lucky we are.

Further south, in the lands of the Inca, Demetrio Tupac Yupanqui’s new translation of “Don Quixote” into Quechua is helping to boost the once-imperial language that had fallen on hard times.

Once the lingua franca of the Inca empire, Quechua has long been in decline. But thanks to Tupac Yupanqui and others, Quechua, which remains the most widely spoken indigenous language in the Americas, is winning some new respect. Tupac Yupanqui’s elegant translation of a major portion of “Don Quixote” has been celebrated as a pioneering development for Quechua, which in many far-flung areas remains an oral language. While the Incas spoke Quechua, they had no written alphabet, leaving perplexed archaeologists to wonder how they managed to assemble and run an empire without writing.

Both Google and Microsft have versions in Quechua, and the current government in Bolivia is trying to make fluency in Quechua a condition of civil service advancement.  It might well survive.

I was in a major art supply store the other day and just stood in awe in front of the acrylic paint section.  I was marveling at the different types of paint now available, fast acrylics of every colour in every possible consistency.  Hard paints, soft blending paints, liquids: guaranteed.  It is not that long ago when artists had to create and mix their own pigments, never being absolutely sure of the properties of their ingredients, and whether they would last.

It was of interest therefore to read of the work going on with modern equipment to track down faded or disappeared colours in works of art.  In particular, the now almost colourless sky of Wimslow Homer’s “Oh To Be A Farmer’s Boy” has been shown to have been a brilliant red and orange.

In preparing for the Art Institute’s major Homer exhibition, conservators discovered, using X-ray fluorescence spectrometry and visual examination through a microscope, that the painting’s white skies were originally painted in unstable red and orange dyes that have almost completely faded.

That’s neat.  But modern techniques allow for even more improvements in method.  Just a few years ago, given such information, the restorers would have been busy re-painting the original.  Now, we can retain the original as it has become (important in my judgment) and the conservators can use sophisticated software to display to the public their idea of the original painting.  This is what they have done with the Homer exhibition.  Good stuff.

A Pall On (Some) Malls

Thirty years ago when I first settled in Vancouver permanently, I lived in the Plaza Towers at the north end of the Lions Gate First Narrows Bridge.  In those days, there wasn’t much going on along Marine Drive going east from the Bridge.  But turning west off Lions Gate brought you straightaway to the Park Royal Shopping Centre.  When it was built in 1950, Park Royal was officially declared the first covered mall in Canada; and it was still a big deal in 1979. I’m sure someone told me it was the biggest shopping centre in the Commonwealth.

If Park Royal was the first mall in Canada in 1950, then Canada was a generation or more behind the United States in the development of automobile-based consumer paradises.  The first official mall is said to be the 1931 Hugh Prather design for the Highland Park Village, Dallas TX, although both the County Club Plaza in Kansas City MO (1924) and Arthur Aldis’s Market Square in Chicago IL have their supporters.  By 1951, multi-story malls were being built in the States and culminated in 1992’s Mall of America in Bloomington MI, still the largest in the county.  (When I was working with a bunch of folks in Bismarck ND a few years ago, they used to joke that a good day in North Dakota was driving to the Mall of America.) 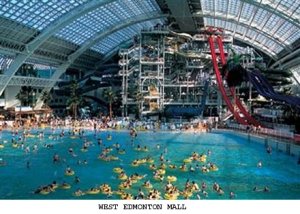 But Canada learned quickly, and the West Edmonton Mall — with its entertainment centres and submarines — has been the largest such centre in North America since it opened in 1981.  In fact, it was the largest in the world until 2004.  In my early days here, I had several colleagues who took honeymoons or vacations to West Edmonton.  Much of downtown Vancouver has malls for several levels below each street, and we have easy transit access to suburban centres such as Metrotown.

Throughout the 1980s and 1990s, at least, the  mall seemed to be the centre of youth culture, driven by and thereby helping to drive post-Vietnam consumer-capitalist retail marketing.  And on the very few occasions that I visit malls — pre-Christmas mainly — these places generally still seem very busy.  However, they don’t always work.

The UAE National has a fascinating article about the largest mall in the world — the South China Mall in Dongguan, China, with 7 million square feet of available space — which

is not just the world’s largest. With fewer than a dozen stores scattered through a space designed to house 1,500, it is also the world’s emptiest – a dusty, decrepit complex of buildings marked by peeling paint, dead light bulbs, and dismembered mannequins.

The few tenants are not required to pay rent any more.   It wasn’t supposed to be this way:

Three years ago, just before the South China Mall opened, it was featured on the front page of The New York Times as part of China’s “astonishing” new consumer culture. As the Times put it, with perhaps a trace of hyperbole, the “Chinese have started to embrace America’s ‘shop till you drop’ ethos and are in the middle of a buy-at-the-mall frenzy.” A spokesman for the mall’s developer Hu Guirong, an instant-noodle billionaire, told the Times that Hu’s team had spent two years traveling the world – France, Italy, Nevada – in search of ideas. They expected the mall to average more than 70,000 visitors a day. “We wanted to do something groundbreaking,” the spokesman said. “We wanted to leave our mark on history” …

The big attraction of the South China Mall was supposed to be its “foreign” design. Learning from Las Vegas, where replicas of European monuments and New York landmarks draw throngs of tourists, the Dongguan mall modeled seven zones after various exotic world locations. Its rooftops reflect at least twenty different influences, from Czech town halls to Turkish mosques. As the mall was about to open, one of its design consultants, Ian Thomas of the Thomas Consulting Group in Vancouver, told the trade publication Shopping Centers Today that the zones were “done with such authenticity, with such great attention to detail, that you really think you’re in the real thing.”

But for all the hype, the mall has failed because the shoppers never came.  The article suggests that the mass middle class with disposable income has not yet arrived in most of China.  This, plus faulty financing and leasing plans condemned the South China Mall to its present fate.   I assume that different reasons are behind the hundreds of thousands of square feet of empty space in the US featured on http://www.deadmalls.com.  And here at home, what explains the failure of the International Centre in Chinatown when other malls succeed in the Lower Mainland?

The shopping centre is a key component of 20th century economic, retail, marketing and social history.  If you are interested in going further, you should visit here, here, and here.