The Market Is Working 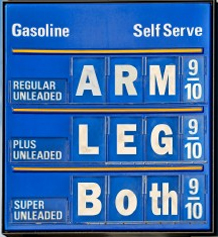 Long time readers will know from postings in my earlier incarnations that (a) I don’t much care for cars (having given up my last car back in 1991); and (b) I think Vancouver’s transit system is swell and keeps getting better (I use it every day). I am, therefore, interested in gas prices only in so much as I see higher prices as a fulcrum against which behavioural changes can be leveraged.

And so far, the mechanism of high gas prices seems to have achieved at least one laudable objective. Transit ridership in the US continues to increase at a fast rate — 85 million more trips in the first quarter of 2008 than in the same period last year. They are on track for an annual total in excess of last year’s record 10.2 billion trips.

“There’s no doubt that the high gas prices are motivating people to change their travel behavior,” said American Public Transportation Association president William Millar … In a survey released last month by IBM’s Institute for Electronic Government, a total of 31% of commuters who normally drive to work said they would change their transportation habits if gas were to cross $4 a gallon. IBM also found that a total of 66% of drivers would seek other means of transportation if gas hits $5 a gallon.

I haven’t seen local figures, but anecdotal evidence and personal experience indicates a greater ridership on the buses in Vancouver, too. This is good stuff!

This entry was posted on Wednesday, June 11th, 2008 at 1:21 pm and is filed under Economics, Other Writings. You can follow any responses to this entry through the RSS 2.0 feed. You can leave a response, or trackback from your own site.